So have YOU got what it takes… to be a hero?

Check out out here! Dear Backers,
How are you? I am fine. If you haven’t come to the Replay Games forums recently, you’ve missed a lot of great info, art, and commentary by Dennis Flath, the Technical Art Director at N-Fusion. He checks in just about every day and has been answering questions right and left. Feel free to ask him any questions you want about N-Fusion’s dev process (and don’t forget you can ask me questions, too, also in the “Questions for the Team” subforum, which I check constantly).

Britton Mathews, our website guru, updated the Replay Games site (www.replaygamesinc.com) and the forums (http://forums.replaygamesinc.com/) over the weekend, and we’ve moved over to a new server. If you have any problems at all accessing or using the site or forums, let us know so we can address it quickly – but, so far, it’s been a very smooth transition.

Britton will also be sending out the surveys starting this week, so if you’ve got Leisure Suit Larry swag that’s supposed to be coming your way, you should get your survey soon. Kickstarter’s software only allows us to send these out *once*, so if you send yours in and it’s incomplete, or you want to change some information, contact us through Replay’s Customer Service and we’ll make sure it gets changed.

The artists at N-Fusion, Al, and I have spent a good amount of time this past week on the Larry model sheet. It’s now pinned down and we’ll probably release this model sheet very soon (possibly before my next update). Al and I are both totally happy with the version we ended up with: it gives Larry a tiny bit of a younger look (so that we can age him gradually throughout the games that follow), the right attitude, a properly tailored leisure suit, and a nose that pays subtle tribute to male genitalia. Or is that my imagination?

Oh, and N-Fusion is preparing a video update. They’re hoping to have it ready this week.
I’ve been asked if we’ll be releasing model sheets for all the characters, and the answer is an “almost yes.” My current thought is: we’ll release them, but not all at once, and maybe we should avoid releasing the Jasmine model sheet so that she’s a total surprise. I’m really reluctant to take all the mystery out of her prior to the game’s release, since she’s the only real new major character in the game.

Al has decided, at least for the time being, not to have his actual band playing in the game. He’s currently talking to a variety of composers/arrangers, and we hope to have a firm decision on this individual within the next couple of weeks.

For my part, I’m currently working on the Age Verification questions. Trying to make them funny and not TOO tough. Those of you who are under 17 right now, or who are too old to remember trivia and current events from the very early 2000’s, had better bone up on your pop culture. (Rim shot!)

Yours in Larry Laffer,
Josh

Hey everyone! We wanted to announce that we just hit our $550k stretch goal! Thanks to your support we’ll now be including multiple languages in SpaceVenture! CLICK HERE to find out more information about this and future stretch goals!

Don’t forget to check out our official newspaper, “The Andromedan Post” for the latest news!

Introducing the Andromedan Post! The place to get the latest news of SpaceVenture and more! http://andromedanpost.com

We’ll still be posting updates here on Kickstarter, but you’ll get more frequent news from our official online newspaper! 🙂

PS- Check out the news about when Lori and Corey Cole will be live with Chris Pope on Tuesday!

Previous shows including those from Justin.tv have been back dated and added to the feed. With the exception of the Ellen Mclain episode as we are still fixing some audio issues. Visit http://podcasts.guysfromandromeda.com or iTunes to check those out now!
We’re still planning to put together higher quality copies of the video feeds for all of our Justin.TV episodes. Visit http://commentaries.guysfromandromeda.com to check that out.
The podcasts are planned to be weekly, but we’ll also be trying to work around everyone’s schedule.

Lori Cole and Corey Cole, the master minds behind the Quest For Glory series are coming on to talk with Chris Pope live within the next few days! Lori and Corey will be talking about their history with Sierra along with a little info on their upcoming Kickstarter plans! Watch the Guys From Andromeda Twitter feed for the exact date and time announcement. This post will also get updated once that is determined. The show is planned for early next week! 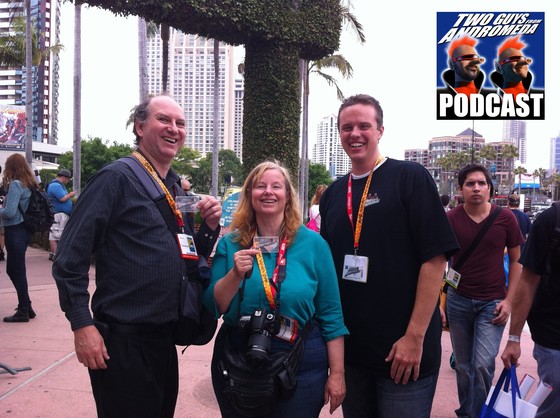 I’m interrupting my biweekly update schedule to deliver some news that many of you have been anxiously awaiting: the arrival of N-Fusion staff on the Replay Forum!

Dennis Flath, the Technical Art Director on our project, has posted some bio information on himself and the rest of the team, given us some sample artwork, has dropped some other tidbits, and has committed to checking the Replay forums daily to answer quick questions (more comprehensive answers will have to wait for his bigger updates). Dennis already answered at least one or two interesting questions in the “Questions for N-Fusion” thread, in addition to the big info drop in the “Staff Introductions” thread.

This Wednesday, he’s aiming to post another art update. And we’re kicking around the idea of video updates, since Dennis has an HD camera and is handy with editing software. Yea or nay?

Talk to you in a few days.

Greetings again from your faithful correspondent, Josh Mandel.
During the past couple of weeks, both Paul and I have (on separate occasions) visited the offices of N-Fusion in beautiful New Jersey. Jeff Birns, the CEO and Creative Director at N-Fusion, led a six-hour meeting in which he and I, along with team members Chris, Joe, and Dennis, went over the design and milestones. Jeff’s approach to milestones is as meticulous as I’ve ever seen in this industry, with seemingly every miniscule detail plotted out and planned.

On LSL, N-Fusion is undertaking several tasks at once. Programmatically, the game is being constructed from start to finish immediately, using sketches, placeholder animation, placeholder text, placeholder music, and even placeholder voices. This way, each finished asset can be dropped right into the game as it’s completed, and we can immediately see how it fits and identify any issues or revisions needed to make sure the completed asset works as needed.
Simultaneously, the artists are developing model sheets for every character in the game. Al and I will go over the rough models before they’re brought to a finished state (as we will with the backgrounds and animations). Once the model sheets are complete, we plan to share some of them with you in future updates. Al and I are also spending a lot of time talking about the game’s music. This is one area that’s extremely near and dear to Al’s heart, what with his musical background, and I remember well on Freddy Pharkas how tightly Al holds those reins. I believe – but don’t swear me to it – that Al’s own band will be recording at least some of the in-game music.

I’ve always felt that, as the original Sierra LSL series progressed, the music got jazzier and jazzier, to the point where the melody line – the most infuriatingly catchy melody in the business – was getting a little too lost. Moreover, LSL1 specifically takes place in a Vegas-like atmosphere. So my suggestion to Al was that, since neither the original LSL1 nor the LSL1-VGA remake has had a Vegas soundtrack, that that’s what we should strive for here: a brassy, big-band sound such as you might hear accompanying The Rat Pack. Al agreed that this was a new and appropriate direction for the music, so I’m tremendously excited by this. We’re currently reviewing various arrangers.

One last bit of great news, which I freely admit is purely victory-by-association for all of us with a stake in LSL: N-Fusion has been declared a Finalist in the Unity 2012 Awards for their most recently-released game, Air Mail! Better still, they’re not just Finalists in one category…they’re Finalists in three categories:

The Finalists are individually selected by Unity “to honor the best content being created with Unity.” The awards will be presented on Thursday, August 23rd. (Air Mail, not incidentally, was the iPad Editor’s Choice in the App Store when it was first released in late May.)

To bring it a little closer to us: since N-Fusion will also be developing LSL in Unity, I think this bodes extraordinarily well for our project.
So I’ve got my fingers crossed for them, and I know Larry, wherever he is, is pulling for them as well. But then again, Larry pulls for everybody.

My name is Josh Mandel, and I approve this update.

If you’re not a back of Jane Jensen’s Pinkerton Road, you do not know what you’re missing! There’s been some great updates and videos about Moebius!