I got permission from the owner of the original site (which has since been taken down) to host the data here. Site originally by: Geoff M. (Iceberg), with thanks to Michael H. (Moneo) and Mike M. 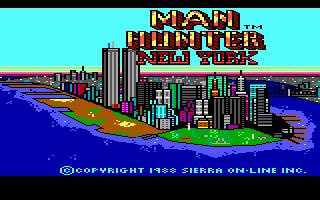 Welcome to New York… Click the image above, Manhunter. 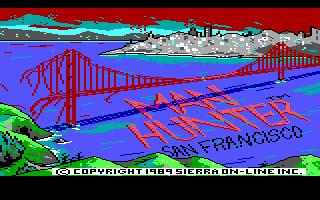 Welcome to San Francisco… Click the image above, Manhunter. 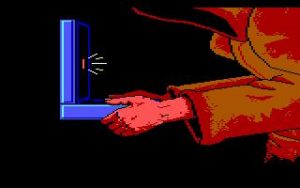 Click the image above to learn about the history of Manhunter, human… 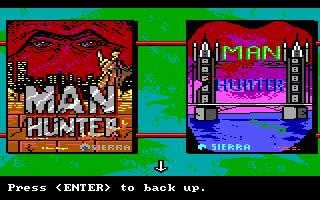 Click here Manhunter, to see a Play Through of Manhunter: New York and Manhunter: San Francisco…

Welcome to The Manhunter Shrine, your largest source of information for the classic Evryware/Sierra games Manhunter: New York and Manhunter 2: San Francisco.

EXCLUSIVE FROM THE MANHUNTER SHRINE –
INTERVIEW WITH DEE DEE MURRY
Greetings Manhunter fans!  As you may know, 2013 is the 25th anniversary of Manhunter: New York.  To commemorate the occasion, The Manhunter Shrine is proud to bring you a brand-new interview with the very talented Dee Dee Murry, award-winning artist behind the graphics in the Manhunter games.

MHS: How did you initially get involved with the Manhunter games?

DDM: My brothers, Dave and Barry, started creating games together and made the Ancient Art of War series, I joined in as the first Manhunter was started, in the early 80’s.

MHS: Did you have any involvement besides doing the artwork (e.g. story)?

MHS: Did you do sprites and animation as well as backgrounds?

DDM: I was not involved with the animation much, I mainly worked on the characters and backgrounds.

MHS: Sierra’s old AGI game engine had relatively low-res graphics and was limited to 16 colors.  Was it challenging to create the graphics using their system, or did the limitations make it easier?

DDM: Well when we started, we only had 4 colors to work with. So 16 seemed like a full palette! In retrospect I don’t know how we did it with just the 16!

MHS: You’re primarily known as an award-winning wildlife artist.  How was it to work with such a different medium and with such different subject matter?

DDM: The gap between computer graphics and fine art has closed dramatically since then. But at the time it was a totally different experience to create art with a mouse and pixels. I remember the first scene I got to illustrate for Manhunter New York, a brick wall with a hole blown through it, I spent hours drawing in every pixel. Of course that made the file much larger. So my brother Barry very patiently showed me how to do it more efficiently and I redid the whole thing, correctly this time. It was a good lesson but it was a little painful to delete all of the work I’d put hours into.

MHS: The graphics in Manhunter are post-apocalyptic and sometimes rather ghoulish.  There are also some abstract elements to your work, such as vivid splotches and slashes of color in the sky.  What sorts of inspiration and influences did you draw on?

DDM: This came largely from Barry. He had a great imagination and creative ideas.

MHS: Gore notwithstanding, I thought that the graphics in Manhunter were extremely tastefully done.  I particularly liked how some scenes were extremely detailed, while others (such as dark underground scenes) had a very minimalist style.  Was there a particular approach you took to creating each scene?

DDM: The mood of the scene pretty much dictated the style. And of course the scenes with important clues were done more detailed than others.

MHS: Out of all of Sierra’s AGI games, Manhunter’s graphics are far and away the most “artistic”.  Were you involved in taking the original location photographs that were rendered into the game?  If so, how did you approach the photography?  Manhunter used a lot of creative techniques like long pans, extreme close-ups and unusual camera angles.

DDM: Barry and I flew to San Francisco and spent a couple of days taking photos of the city for the game. That was really helpful. Barry had a great eye for compositions and angles.

MHS: None of the characters in Manhunter ever spoke, so everything had to be relayed visually to the player.  Did this create any added challenge for you?

DDM: At times. But it also made it easier in other ways. It was an interesting challenge to convey through images what normally would be spoken.

MHS: You must have had to work from historical photographs to create your vision of Coney Island, because the Manhunter version was based on Dreamland Park rather than the current amusement park.  What can you recall about the process that went into that decision?

DDM: Actually that was in the works before I joined the team so don’t know the story behind that.

MHS: Do you have any stories or favorite memories about making the games that you’d like to share?

DDM: I am very devoted to my four legged family, so in the game I hid either my pets names or images of them when I thought I could get away with it. The big dog that comes out and runs across the room to attack was based on my Great Dane, Fred.

MHS: What types of projects are you currently involved in?

MHS: Can you tell us about your art studio?

I taught my little blind and deaf dachshund, Hallie how to paint also. She took to it so well she now has her own web site where she sells her paintings and donates sales to dog rescue. She has now been on several tv shows, radio shows, articles, went viral on the internet, was on the Yahoo home page for a day, etc. This weekend we went to an awards banquet to accept the “PAWS Dog Hero Award” she won. Last year she made more money selling her art than I did. We joke it’s pretty bad when you make your living as an artist and your blind dog sells more than you do. I love it though she is an amazing little dog.

Thanks again Dee Dee!  Be sure to visit Dee Dee at www.deedeemurry.com and Hallie at www.hallieart.com.
EXCLUSIVE FROM THE MANHUNTER SHRINE – INTERVIEW WITH DAVE MURRY
Greetings Manhunter fans!  We recently caught up with Dave Murry, co-creator of the original Manhunter games, and asked him a few questions about the series.  Thanks very much to Dave for the interview!

MHS: The Manhunter games have a pronounced “outside the box” feel to them, from the interface to the graphics to the fact that your aliens were about as far from the stereotypical “little green men” as possible.  Were you deliberately trying to be as different as possible from other games of the time, or was that just the way it all came together?

DM: Our intent was to make something as far away from Sierra’s Quest games as possible. We also wanted to make a more “mature” game than the other games available at the time. The alien design was the result of needing something that was easy to animate.

MHS: What influenced the oppressive, Orwellian tone of the games and the gritty, bleak city-scapes?  What were your main sources of inspiration?

DM: My brother, Barry, came up with the basic idea. He was a big alternative comics fan and that influenced the direction that we took with Manhunter.

MHS: The fact that none of your characters ever spoke definitely added to the atmosphere.  Did you find it challenging to create a game that had no dialogue?

DM: We decided that the text parser built into Sierra’s AGI was too limiting so we came up with MAD. The MAD device substituted for dialogue and actually made the game easier to design than if we had used dialog.

MHS: The Manhunter series was rather grisly for its time.  It was unusual for games from the 1980s to feature explicit gore the way Manhunter did.  Was there ever any concern about how that might be received?

DM: Sierra had some concerns about the gore but we convinced them that it was an essential element in the game. We really didn’t know how it would be received but it was the game that we wanted to make.

MHS: Manhunter also incorporated a fair amount of slapstick humor and visual comedy.  Was this done to balance the horror elements?  And whose sense of humor was responsible for the Manhunter’s polka-dotted undershorts?

DM: Yes, we thought that it was important to inject occasional humor into the game to balance the horror and to ease any possible concerns that Sierra might have about the dark nature of the game.  The undershorts were Barry’s idea.MHS: Manhunter had you playing futuristic detective, and the series had all the ingredients of a gripping mystery novel.  Where did that influence come from?

DM: Movies such as Blade Runner were a big influence as well as the alternative comics that Barry was reading.

MHS: The first two games were set in New York and San Francisco, respectively, and the third was to have been set in London.  Were there ever any other cities considered for the “honor” of being invaded by the Orbs?DM: We also considered Chicago and Paris but we liked the Jack the Ripper influence on London.  The London game would have had a strong Jack the Ripper atmosphere to it.

DM: We were only in each city for a couple of days. We planned where we wanted to go in each city before we went so it didn’t take very long to take the pictures.  It took around 18 months to develop each game.

MHS: Were there any additional locations that you wanted to include in the first two games, but weren’t able to?

DM: Not really. We just picked the locations that best fit the story line.

MHS: Your version of Coney Island was based on Dreamland Park, an amusement park that operated on the same site until its destruction by fire in 1911.  How did that come about?

DM: We used Dreamland Park because it was a more interesting place than the later parks.  Our idea was that the Orbs reconstructed it to give the citizens of New York a diversion.

MHS: The second game was more complex and convoluted and arguably a bit darker than the first game.  Was that deliberate?

DM: In the first Manhunter we were more concerned with the technical aspects of how to present the story that we wanted to tell and learning the AGI. The second Manhunter freed us up to focus on a more elaborate story.

MHS: I would be remiss if I didn’t ask at least one question about Manhunter 3.  When the second game was under development, was there a vision for the way the third game would unfold, or were you playing it more or less by ear?

DM: When the MH2 was under development, we had to focus all of our attention on it. We had to decide on the location for MH3 so that we could put the teaser at the end of MH2 but that was it other than a few ideas that we couldn’t include into MH2 that we set aside for possible inclusion in MH3.

MHS: Whose idea was it to have you wear the brown robes for the pictures on the backs of the game boxes?

DM: The robes were our idea. We rented them from a local costume shop. 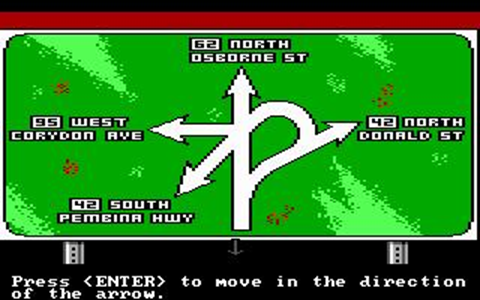 If you are a new visitor to The Manhunter Shrine, welcome!  If you’ve been here prior to November 2009, you’ve probably noticed that things are different.