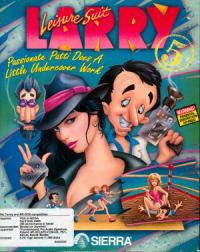 The ending of Leisure Suit Larry III broke the “Fourth Wall” by showing Larry Laffer and Passionate Patti coming to the Sierra studios and making games based on their adventures, living happily in a mountain cabin in Coarsegold. Al Lowe never planned a 4th game to the series, and was being asked to continue the series; only he was at a dead end because he couldn’t find a way to start it since the scenario had completed a story arc.

Meanwhile, Patti is recruited by the FBI to dig up incriminating evidence on two record companies which are suspected of hiding subliminal messages in their songs. At the same time, PornProdCorp schemes to eliminate the competition in their industry by donating money to CANE (Conservatives Against Nearly Everything).

NOTE: Watching the videos may contain some spoilers, if you have not yet already played the game!