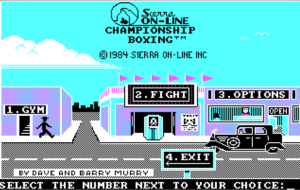 The Manhunter series is the brainchild of Barry Murry, Dave Murry and Dee Dee Murry of Evryware Inc., a software company they had founded in 1979.  Barry and Dave had previously earned accolades for their groundbreaking games The Ancient Art of War (1984) and The Ancient Art of War at Sea (1987), both published by Brøderbund.  They also created Sierra Championship Boxing in 1983. 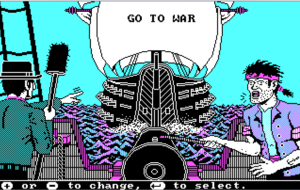 Around the time that The Ancient Art of War at Sea was released, Sierra contacted the Murrys to see if they would be interested in creating another game for them.  Having previously worked together on Sierra Championship Boxing, the Murrys jumped at the chance.  They decided that they wanted this new game to be different from any of the other adventure games for which Sierra was quickly becoming famous.  Their concept went through many different changes over the course of the design process, and the result was 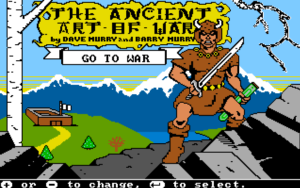 Manhunter: New York.  A huge departure from other Sierra games, Manhunter: New York included a number of revolutionary innovations, including a first-person perspective, bizarre camera angles, picture-in-a-picture, long pans, extreme close-ups, overhead shots, faux 3-D sequences and a parserless, pseudo-point-and-click interface.  It was released in 1988 to overwhelmingly positive reviews, was voted “Adventure Game of the Year” by several computer gaming magazines, and went on to sell well over 100,000 copies. 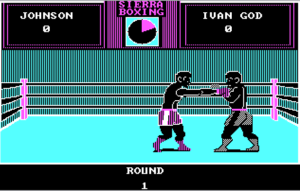 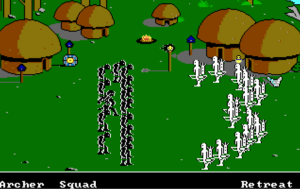 Unfortunately, the third installment never came.  The association between Evryware and Sierra ended in 1989 and the two companies never partnered up again.  The amazingly innovative Manhunter series, which had foreshadowed so many of the up-and-coming changes in the computer gaming industry, would remain unfinished.  Fans could only ponder what the future might have held for Manhunter… 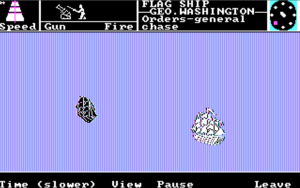 Even today, there have been virtually no details released that would give us any sort of idea as to the game Manhunter 3: London was supposed to be.  The plot is completely unknown.  Given that there was never a deal struck between Evryware and Sierra to actually move the game into production, it’s probable that it never went beyond the conceptual stage.  However, since Manhunter 3: London was to be the third and deciding game in the Manhunter trilogy, it is likely safe to assume that the Orbs would have ended up being driven not only from London, but from Earth as well. 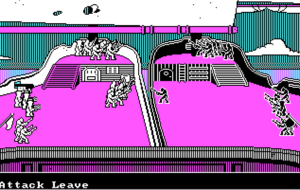 And yet it is entirely possible that the story would not have ended there, either.  The Murrys had a vision of a fourth and final Manhunter game that would have been set not in any Earth city, but on the Orbs’ home planet!  Just like its proposed predecessor, virtually nothing is known about what this mysterious fourth game might have been like.  The only thing we can assume is that if Manhunter 3: London was about driving the Orbs from Earth, Manhunter 4 would have been about eradicating their evil presence from the universe once and for all! 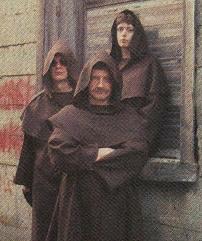 The Manhunter saga begins in 2002 (which, at the time the games were released, was still a decade and a half away).  In late July of that year, an enormous fleet of spaceships descended silently to the Earth under cover of darkness – like thieves in the night.  Their occupants: the Orbs, a race of giant alien eyes, and their hideous helper robots.  The journey had taken them six months – but they had arrived at last. 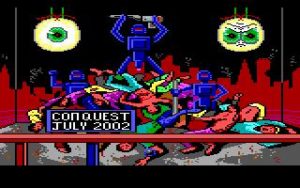 San Francisco was among the first cities to be invaded.  New York suffered the same fate a few days later, in early August.  Earth defenses proved woefully insufficient to ward off the aliens, and humankind was utterly unprepared to deal with a crisis of this type and magnitude.  City after city fell as more spaceships arrived.

The Orbs at once set to work.  Their first goal: subjugating mankind.  All humans were required to submit to a surgical procedure which involved implantation of a tracking disk in the backs of their necks.  These disks emitted a signal that could be read by the Orbs’ newly devised tracking systems.  Any human committing a crime against the Orb Alliance could thus be immediately identified, located…and “corrected”. 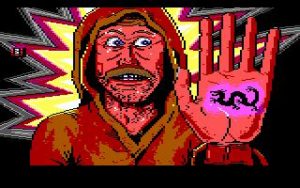 Further rules were developed for humans.  All were required to wear uniform brown robes and keep their faces hidden as much as possible.  Severe travel restrictions were imposed.  But the most heavily enforced rule was that humans were never, ever allowed to speak to one another.  Death was the penalty for non-compliance.

Resistance was stiff in New York.  On October 31, 2002, humankind mounted one final, desperate attempt to retake their city, dubbed the “last stand”.  The Orbs sent their powerful robots into the fray, and the result was an absolute slaughter.  The next few weeks were dedicated to extinguishing scattered pockets of resistance, and the Orbs declared New York officially conquered on November 25, 2002. 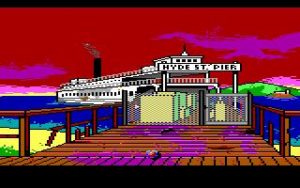 The Orbs next embarked on a “cultural cleansing” of the planet.  This began in December 2002 and involved the removal of all cultural artifacts from museums, art galleries, libraries and churches.  This project took approximately four months, and in March 2003 a fleet of spaceships took off to the Orbs’ home planet, laden with as many Earth artifacts and relics as they could hold.

Following this, the Orbs began a campaign of psychological reprogramming.  Posters and films were produced depicting the Orbs as liberators and benefactors rather than a malevolent occupying force.  For the most part, however, this propaganda was not well received by the captive human populace.

Meanwhile, a problem had arisen for the Orbs: the human tracking disk implants were not working properly.  The disks were plagued by two major problems.  First of all, the disks were transmitting the locations but not the identities of their hosts.  Second, it had become apparent that Earth soil interfered with signal transmission.  Any human who went underground became completely invisible to the Orbs’ tracking systems.

As rumors of the disks’ failings began to circulate among the humans, pockets of resistance began to develop once more.  These were mostly based in underground tunnels, caverns and sewers, where the signals from the tracking disks were unreadable.

The Orbs responded by pressing humans into their service.  These humans were to work for the Orbs, reviewing the tracking records of any human suspected of committing a crime against the Alliance, and following them to discover their identity.  The title given to these humans was Manhunter.

And thus, the story begins…