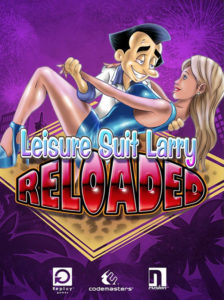 While it operates along the same lines as the original Leisure Suit Larry – with our lovable loser, Larry Laffer spending the night in Lost Wages, trying to lose his virginity – many of the puzzles have been changed – some slightly, some drastically. This version also introduced a new woman for Larry Laffer to interact with – named Jasmine.

Being 40 years old and living with his mother all of his life, Larry has led a very sheltered life; and is now looking to live it up some!

So now, it’s up to you to help Larry Laffer fulfill that one desire to finally feel the touch of a woman and be satisfied! Along the way you will encounter an assortment of women, who for the most part, will only live to further complicate and belittle our lovable hero, Larry Laffer.