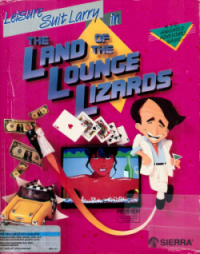 Leisure Suit Larry: In The Land of the Lounge Lizards was initially released on June 5,1987 by SIERRA ONLINE, INC. (Note: Despite several online sources such as Wikipedia, Leisure Suit Larry 1 EGA was released June 5, 1987, per Al Lowe. By July 5, 1987 Al Lowe was knee deep into Police Quest 1).

Beginning the game on the streets of Lost Wages, Larry Laffer has come here for one reason – and one reason alone. To finally get “Laid.”

Being 40 years old and living with his mother all of his life, Larry has led a very sheltered life; and is now looking to live it up some! 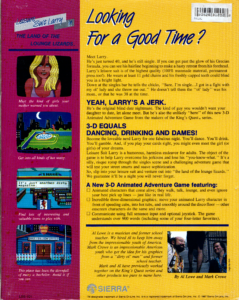 So now, it’s up to you to help Larry Laffer fulfill that one desire to finally feel the touch of a woman and be satisfied! Along the way you will encounter an assortment of women, who for the most part, will only live to further complicate and belittle our lovable hero, Larry Laffer.