Torin’s Passage is a game I wrote in 1994 after watching the film Mrs. Doubtfire with my daughter. I realized during that film that the audience was laughing in two different pitches: high little giggles when the kids laughed at the slapstick parts of the film, and deep knowing guffaws when the adults caught something that they knew the kids wouldn’t get. I thought: Why isn’t there a computer game that my 9-year-old daughter and I could play that works like that?

So I created one.

The game stars Torin, and his side kick, Boogle. The game is filled with creative characters by James G. Murphy, who left Sierra for a little company called Pixar, where he is now a lead animator. Dreep is still one of my favorite characters.

We were extremely fortunate to convince 3-time Academy Award winner, Michel LeGrand to compose an original score for the game. Needless to say, the music was fantastic!

The Worlds of Strata 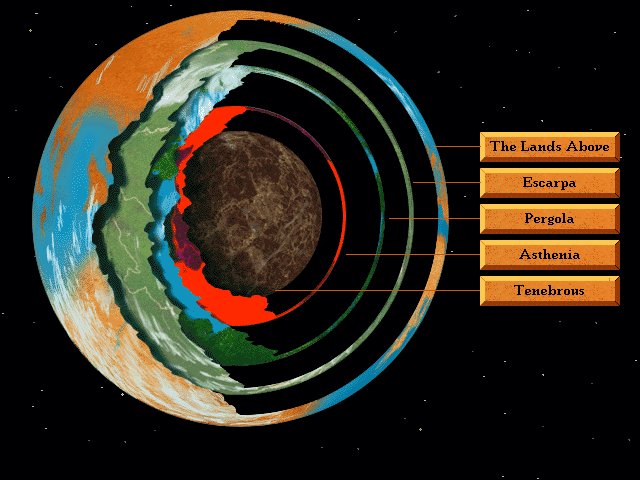 Torin’s Passage takes place on the nested worlds of Strata. There are five levels: The Lands Above, Escarpa, Pergola, Asthenia, Tenebrous and, at the very center, The Null Void. It has three moons and at least one sun. The worlds are connected by shafts of crystal called phenocrysts. Crystals are abundant on Strata. They grow like mountains in the lands above and are omnipresent in the core of the planet. Phenocrysts were invented by Tor the First in the Unity Period, when all the worlds were united under one ruler from the Lands Above. After his death, the worlds drifted apart spiritually and politically, but not physically.

Before Torin, the last time a phenocryst was used was when Lycentia was ostracized. Accused of a crime she didn’t commit, she was banished to the lands below. She has spent years in her makeshift home in The Null Void before Torin arrives to release her.

Your journey with Torin begins in a fertile, Earth-like sphere with oceans, lakes, rivers and one central city called Crystal City. Formerly ruled by Torin’s parents, the King and Queen of Crystal City, before they were murdered by Pecand, a man they trusted, who turned out to be a traitor. Torin was rescued by his nanny, but Kurtzwell, the leader of the council, was accused her of murdering the royal couple. Although he didn’t have enough evidence to convict her, Lycentia was still banished to The Lands Below.

The flora and fauna in the Lands Above is diverse and unusual, including talking snails; caffeine-laced slugs; odd, reddish vines that grow sharp, metallic, plate-like spines; and bushes with leaves that bear the symbol of two crescent moons and one full moon in the center. There are trees with square roots and mountains with crystalline peaks. The main inhabitants are humans, with a Middle Earth society. It is a beautiful land, but the inhabitants lived under fear of the dangerous Lands Below. It’s up to Torin to discover their true beauty.

The second nested world of Strata, Eascarpa is similar to The Lands Above except the cities are built on the sides of steep, precarious cliffs, connected by bridges and stairways. Like its enclosing world, Escarpa has rivers and streams running down the mountains and oceans as well. The phenocryst chamber is still intact, but unfortunately with no source of Erredy Powder. The door to the phenocryst chamber is blocked by a three-by-three stone grid. Torin must find all nine tiles in order to open the chamber.

Escarpa is ruled by King Rupert and his sarcastic wife, Di. Their daughter, Leenah, is quite different from everyone in Escarpa. Torin discovers that she looks a lot like him. She had adventured into Pergola, the world below Escarpa, and been captured by the tiny natives. Torin must rescue her.

The people and animals of Escarpa are often difficult to tell apart. The humanoid inhabitants are short and hairy, the opposite of their vertical fortresses. The animals are highly intelligent and able to communicate with humans.

The world of Pergola is covered by forest — tall, enormous trees that create a soft roof of leaves overhead, pierced only by the shard-like phenocrysts. There are also oceans, cascading waterfalls and tropical streams. There are few mountains; most of the geography is flat rain forest.

The natives are much smaller than those on the other lands, barely a hand’s width in height, with purple-hued skin. Their culture is similar to the jungle natives on Earth, with small, clustered towns with huts clinging to the roots of trees or larger cities similar to Medieval fiefs. Their largest city houses the only intact phenocryst chamber on Pergola, which, prior to Torin’s and Leenah’s arrival, was inaccessible. With the help of the small people of Pergola, Torin accesses the phenocryst to send Leenah back to her home on Escarpa, while he continues downwards to Asthenia.

The fourth world of Strata, Asthenia is remarkably different from the others. The land is mostly molten lava and hot rocks. There is no water, yet there are signs of human habitation. The people that once lived on this barren world have vanished before Torin arrives. The incoming and departing phenocryst chambers are surprisingly intact, with the former including a sign saying “Welcome to Asthenia.”

On the same island as the incoming phenocryst chamber, there is an abandoned hut carved into the rock wall and several stationary battle machines. One resembles a hole on a miniature golf course that dispenses stone cannonballs, another is a catapult to launch the cannonballs. Torin uses the latter to launch himself into the next section of Asthenia, an almost endless maze of rock paths edged with hot lava leading to a machine that taps the inner layers of the planet to dispense water.

Beyond that device is a barren lake of lava with an odd pedestal on its near shore. When a button on the pedestal is pushed, a number of perfectly-aligned stone slabs rise from the lava, creating a path to the other side of the lake. Adventurers who jump on these stones should take care, for only a few seconds the stones rise, they sink back into the lava. When the stones are passed, a bridge running from the other side of the lava lake to the phenocryst chamber becomes accessible. Entering the phenocryst chamber requires directing a beam of light across a nearby console.

The fifth and final world of Strata, Tenebrous is also the most isolated. The ruling system is a democracy (like the United States) and the culture similar to 20th Century Earth, with a system of judgment and even a courthouse. Since it’s inside the other four worlds, it is also the smallest. Little sunlight reaches it.

Tall, broad, tree-like stone columns attach the ground to a stony shield surrounding it. Like Asthenia, there is no visible source of water, yet people and plants thrive. The phenocryst chamber is in terrible condition. It was converted to a storage room with stacked crates, paint cans, and pipes running along the walls. Torin only learned this when he transported into Tenebrous and smashed into a nearby pipe, knocking himself out until Boogle revived him. The room seems to have no real exit except the vent shaft near the roof, which leads into blackness and then straight down, not far enough for Torin to kill himself, but far enough to create a human-shaped imprint in a field of grass and being arrested for cruelty to plants.

Plants are rare in Tenebrous, but they are capable of speech and emotion. One of their chief “predators” is an odd species of silkworm called chameleon silkworms, which are capable of creating a copy of any color they are placed on. The humanoid inhabitants of Tenebrous are taller than Escarpans, but shorter than people like Torin. Their skin is pale and yellowish, and none of them have very much hair, even the females. This world allows little sun to penetrate. There are many kinds of animals, including small rabbits, giant centipedes and other odd creatures. And most of them are capable of speech

Tenebrous also boasts the only direct access to The Null Void, the core of the planet of Strata. Tossing a person into the Void is something that is only done when one has been charged of a serious crime, such as Lycentia and… Torin?

The very core of Strata, The Null Void is a hollow sphere inside Tenebrous, coated with crystal shards. It has no gravitational pull because of its location at the center of the planet where gravity pulls from all directions, creating weightlessness. Lycentia was banished to here after being accused of kidnapping Torin. Twenty years later, Torin was ironically tossed in as well. Torin navigates the Void using some bagpipes he “borrowed” from the Amphitheater in Tenebrous. He finally makes his way to Lycentia’s house, a small cave bored into the wall of the Void.