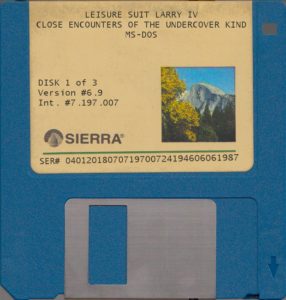 That’s a funny story – I will let Al Lowe tell it.

There are several reasons:

I always assumed the series would be a trilogy. It just seemed right. I was pleased that people enjoyed Larry 2 enough to convince Sierra that a third installment would be well received. Therefore, I made the ending of Larry 3 air tight: Larry and Patti were together at last; Larry was telling his life story through a computer game; it appeared they would live happily ever after, etc.

While Larry 3 was in “crunch mode,” I was working ’round the clock to get it out in time for the 1990 holiday shopping season. I grew tired. And tired of Larry. When Sierra employees asked me about the next Larry, my disgusted response was, “There’s not going to be a Larry 4! I’m stopping with three.”

When we finally gave up trying to develop a multi-player on-line adventure, I came up with some fun ideas for the fourth game, but I was stuck for a beginning. I couldn’t figure out how to start the story because I had left Larry and Patti living happily ever after, remember? How to get them out of Coarsegold?

When my design for the fourth game was well along, one day, in the hallway of Sierra, I ran into an employee I hadn’t seen for quite some time. Her first question was, “So what are you working on these days, Al? Larry 4?” And I, in true smart-ass fashion, replied, “No, Larry 5! Of course I’m working on Larry 4!”

A light bulb went off!

Why not? Who says sequels must always be “in order?”

I started bouncing the idea off people. Inevitably, their response was, “Larry 5? What happened to Larry 4?!”

That was exactly what I wanted. Suddenly I was completely freed from the restraints of the Larry 3 ending. I could have the new game begin anywhere. The idea was wacky, silly, dumb in a perfect “Larry-esque” way. And, it solved the “mind share” problem–how to grab people’s attention and make them think about the next Larry game and had they missed something?

And that, ladies and gentlemen of the jury, is the whole truth about what happened to Larry 4!

Either that or my dog ate the floppies!