This update was written by Mark Crowe, Scott Murphy, and Chris Pope together.

We’ve got quite a lot of big news in this update. Depending on how you look at things, some of what we tell you will seem like fantastical amazingly exciting news, and some.. not so much. Ultimately, we have thought long and hard on everything, and have decided on how we should best proceed with the project. This update will help you understand how we are proceeding. Before you jump to any conclusions, yes the project is still going strong and no we are not broke! Figured we should go ahead and get that out of the way.

HOW THIS YEAR HAS GONE FOR THE TEAM AND THE PROJECT

The year 2015 has been an extra rough year for us all as a whole. Not in a game development sort of way, but in a personal way, which has affected the development of the game.

Eleven years ago Scott moved to Alabama to take care of his mother. There has been a lot of ups and downs he has had to endure during this time in his life, but over the past year, his mom took a major turn for the worse and developed a serious case of Alzheimer’s. Being the sole caregiver for his mom, he has pretty much had to dedicate every waking moment to making sure she was getting proper treatment for her condition. The whole process has been both physically and mentally draining for him. Understandably this has left Scott with little to no time to work on the project with the team.

A couple of months back tragedy struck as Scott’s mother passed away due to her condition. These past couple of months Scott has been in the process of pulling his life back together one day at a time. Scott has written a letter to all of those that would like more information regarding what’s been going on in his life. You can read it here

Though Mark has been hitting on all cylinders through the past year, he has also had limited amounts of time he could put into the project due to family issues as well.

The last couple years actually have been a crazy ride for Mark’s family, caring for elderly parents. But last fall their world was turned upside-down when a trip to the ER revealed that his dear wife had an abdominal ‘GIST’ tumor which proved to be malignant. She was immediately taken into emergency surgery where Doctors were able to successfully remove the tumor. It was incredibly fortunate that they caught it relatively early. Then began her long road of recovery and ongoing treatment. Thankfully, their story has had a happy outcome. But something like this certainly helps put your life priorities in order. Needless to say working on the game took a back seat for a while.

And even though Chris has also tried his best to put as much time as possible into the game, life has hit him hard as well. When the Kickstarter completed, Chris decided to drop the majority of his work with actors in order to focus on the game. This was totally possible given the time frame that we thought we’d have the game out. Needless to say, with the game taking longer than expected, Chris has had to take more work back on to pay the bills. He is still able to dedicate a huge portion of his time to the project and only has to take on work here and there, but it has still been a trying time in terms of pure project time. Again, we say all of this, not to make excuses, but to let you know that we are all real people that have had to deal with some hard real life issues. We hope you all can understand though that we are still going to finish this game out. We will get this game done, and it will be done with very high quality!

THE RELEASE DATE OF SPACEVENTURE(That’s right, I said “THE”)

November 30, 2016 will be the release date of SpaceVenture. Wait, why not 2015 like you guys said months ago you ask? Please see above. Based on how far along we are with SpaceVenture as a whole, we know we can complete the game by November of 2016. Especially now with life getting back to normal. Soon, Scott will be able to rejoin the project and we can proceed with all team members giving Spaceventure their full attention.

We have some pretty big news involving a portion of SpaceVenture that you all are going to get a chance to play over the next few weeks. We have mentioned quite a few times over the last couple of updates that we have been working on a section of SpaceVenture that has been planned since the beginning. Albeit the game design and mechanics didn’t come together until recently, but the story had been written.

A few months back, with Scott’s personal life having to be his focus, Mark and Chris decided to focus on the Cluck Yegger portion of SpaceVenture since it wasn’t going to require most of the team to have insane amounts of time. With Scott being unable to be part of the team, and various other members being tied up, it seemed to the be the perfect opportunity to shift the focus to a part of SpaceVenture that was going to be a different experience than anything we had put together so far.

After spending a few months working on the artwork, game mechanics, programming and all, as it turns out, the Cluck Yegger portion of SpaceVenture evolved into a really fun mini game that parodies a very popular game series circulating around the appstorosphere(totally not a made up word). We even gave the Cluck’s mini game a name. 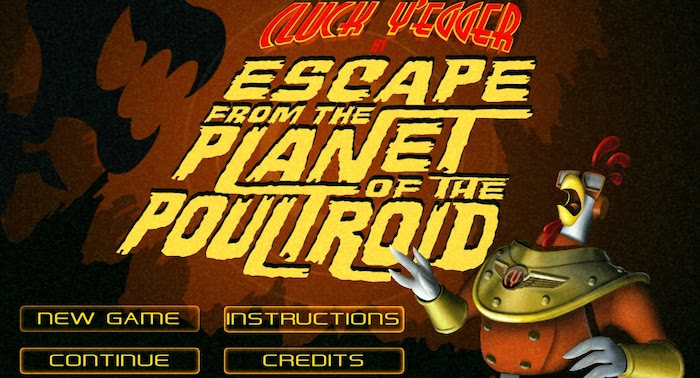 We know you all are chomping at the bit wanting to get your hands on the full game. We also know that the only thing that will quench your thirst for SpaceVenture, is the full game. However, putting all that to the side, we have made a decision to release ‘Cluck Yegger: Escape From The Planet Of The Poultroid’ to the public very soon. How soon? We are in the process of beta testing and polishing right now, so you can expect to hear from us on it over the next couple of weeks.

THE STORY BEHIND CLUCK YEGGER: ESCAPE FROM THE PLANET OF THE POULTROID

How about we start by showing you the intro sequence of the game with full voice acting, music and all!

After being blown out of the sky and crash landing on the planet Poultroid, Cluck will have to make repairs to his ship during the day, but deal with some “family visitors” trying to stop by his cockpit for a dinner time snack at night. With the damage to his ship, Cluck is running on auxiliary solar power that get’s charged during daylight hours. He uses that power to survive at night. If the power in his ship hits zero, it’s lights out for Cluck in more ways the one. 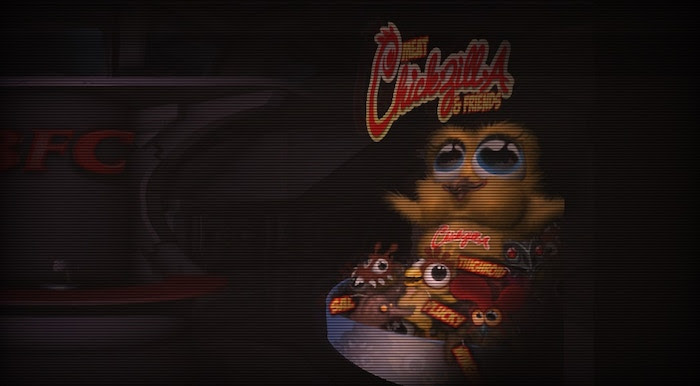 A TEASING GLIMPSE OF CLUCK’S “GUESTS” 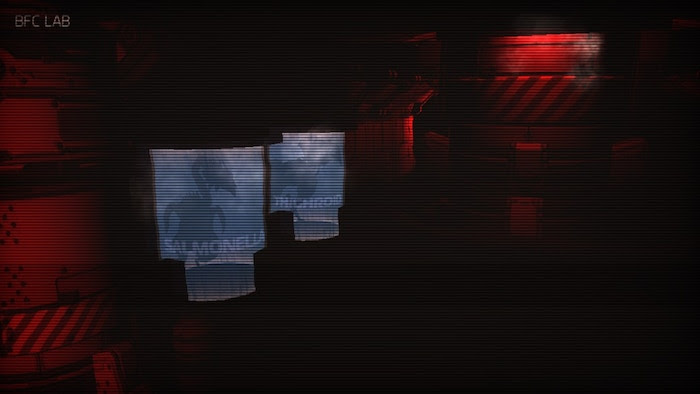 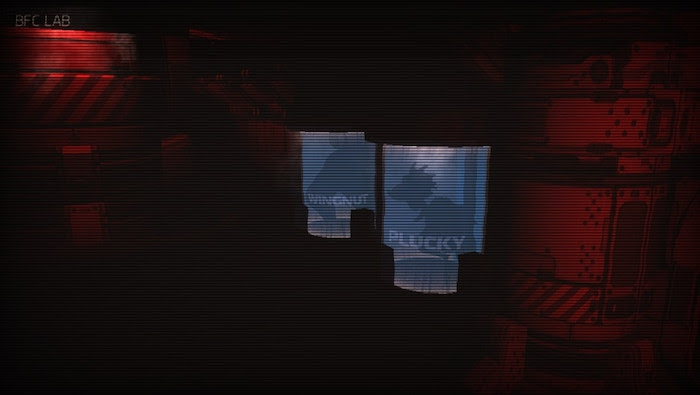 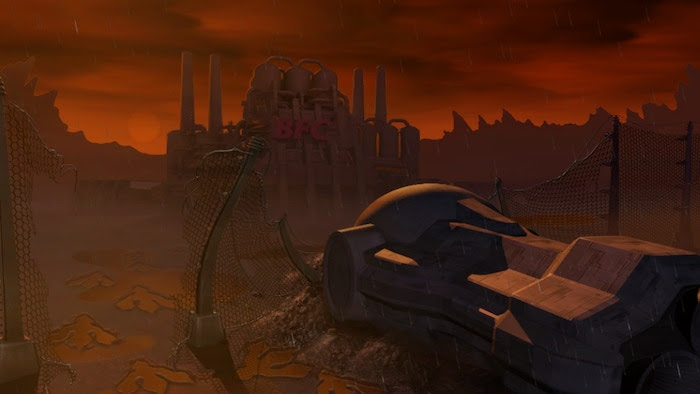 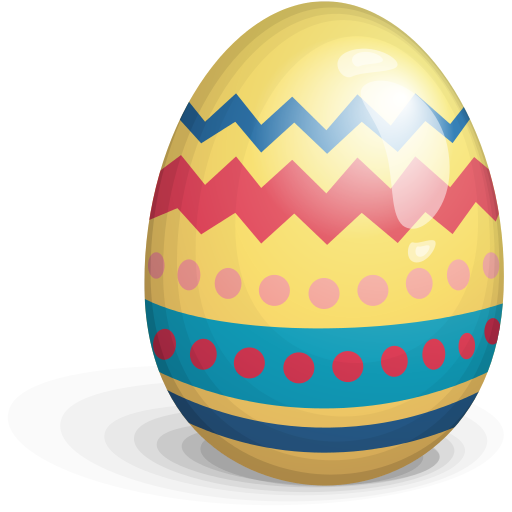 HOW WILL BACKERS PLAY THE GAME

As mentioned above, we are planning to release the game to the public and hope to bring some more money into the SpaceVenture project as a whole. We are not broke, but having more income would help us bring in a few more artists which in turn, would help move the project along faster. Don’t worry, we got you covered! We will be giving our $15 and up backers DRM free access to the Cluck Yegger game on the following three platforms:

What about public release of the game?

The release of the Cluck Yegger game is two fold. We want to give you all a chance to enjoy something from the SpaceVenture game ahead of time, but we also hope to bring some money into the project without having to ask more people like you fine folks to donate it. To start, we are going to try and get the game greenlit on Steam as well as publish it on some of the other game store outlets. Once the computer versions of the game hits, we are going to rework the game to come out for the iPad and Android tablets. We may eventually release the game on smartphones as well.

Keep in mind that once the Cluck game releases, only a very small part of the SpaceVenture team will continue to focus on getting it on the other platforms, everyone else will be shifting gears to wrapping the full game.

What if backers want access to the Steam and other platform versions of the Cluck Yegger game?

Backers will get full DRM free access to the Windows, Macintosh, and Linux version on a private backer only download outlet. In order to get the other platform versions of the game, backers would need to purchase those on those online stores. This would be greatly appreciated and is an awesome way to show a little more love to the project. But if not, we totally understand, the DRM free versions you get access to are full versions of the game and will hopefully give you some enjoyment and laughs.

You mentioned beta testing. Why aren’t backers getting to beta test?

The short answer is time. We will hold true to letting the $30 and up backers beta test the full SpaceVenture game as we get closer to our release date, however due to time, we have a small team of beta testers running through this mini game for play testing purposes. We hope you all will understand that we can’t afford to go through a lengthy beta testing process for the Cluck Yegger mini game, it not being a massively large game itself, the beta testing group is also being kept small in size.

Want to see some gameplay?

We hope this news is exciting to you. Rest assured, we know that you all didn’t back the project to receive a Cluck Yegger mini game. We know you backed the project to receive a fully functional, fun, and hilarious sci-fi adventure game. We plan to deliver on that! Until then, hopefully you all will enjoy this little Cluck Yegger mini game to tide you over. Stay tuned for the next update to contain information on the release and download of “Cluck Yegger In Escape From The Planet Of The Poultroid”!

Finally got around to getting Leisure Suit Larry Reloaded on the site, along with the Blowup Doll, Eve, Faith, Fawn, the infamous Lady of the Night and the newest resident to move into Lost Wages, Jasmine. 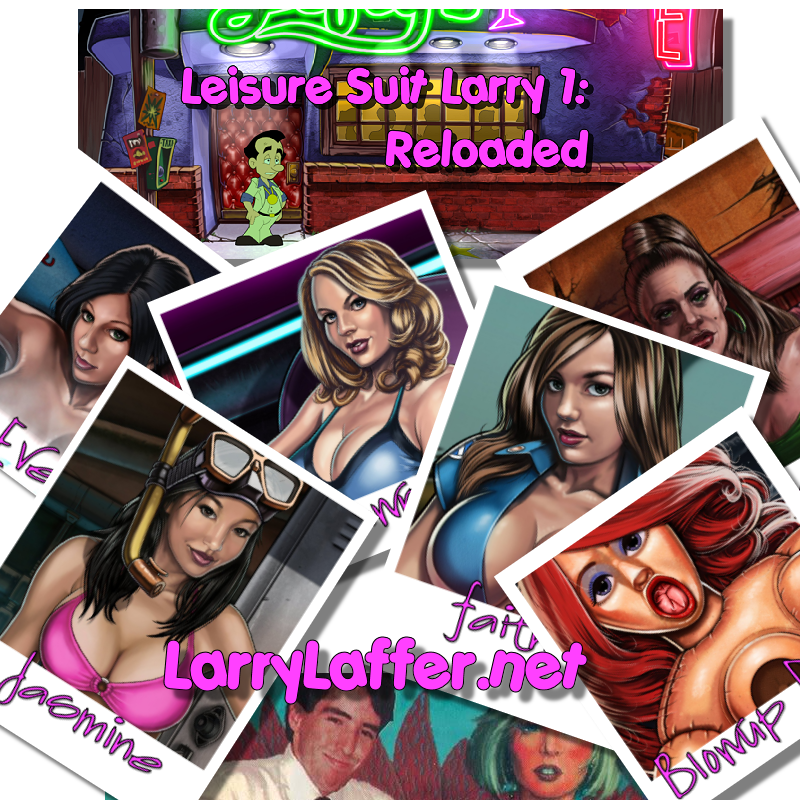