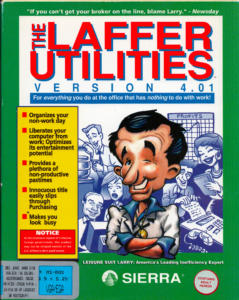 So a few new pages have been added! The Laffer Utilities page is now live. I’ve also added the 1998 version of Larry Casino. The Leisure Suit Larry 1 VGA Remake and the Leisure Suit Larry 1 Reloaded both got their own pages now as well. Both already had pages for the VGA and Reloaded ladies – but now there’s a game page for each of them!

There are mysterious forces behind Hero-U. It is not obvious who is actually financing the school, or why. As for the greater society of Sardonia, we don’t spell it out in the game, but obviously Thief and Rogue are not the only professions. However…

Even though Shawn is a poor young man with an overworked single mother and apparently no connections, someone is looking out for him. Maybe more than one “someone”. That results in an invitation to audition for the Thieves’ Guild, and then a mandatory “invitation” to Hero-U.

Nothing happens by coincidence. The existence of the school, and the fact that it’s built on a “haunted” old castle, is also not a coincidence.

Players will learn something about these mysteries in Hero-U: Rogue to Redemption. Other stories will be developed in future games of the series, and some of it will stay locked in our “Game Bible” as background for all of the games and game events.

It would be wonderful if making a game was like turning on a light switch, or even like taking a collection of Legos and turning them into a stunning model.

Actually, it *is* a lot like that, only there are about 600 models to put together… or maybe 6000. The mystery is that we can even put so many distinct pieces together to create one coherent game.

Every week, Hero-U creeps a little closer to being a complete, fun game. Along the way, JP and Al continue to draw, paint, model, and animate the game. Joshua, Cidney, and our secret programmers move between bringing the game to life and squashing bugs.

For a little more about the importance of each team member to every game we’ve made, and to Hero-U in particular, I posted an article to the Hero-U blog, http://hero-u.com/it-takes-a-team/.

Ryan Grogan has recently returned to the team to help us finish the music and soundscape to make Rogue to Redemption sound as amazing as it looks.

Josh Mandel and Lori alternate between tickling your funny bones and writing moments of suspense, drama, and tenderness. Yes, they’re both still writing game content as we get feedback on parts of the game that need more direction or energy.

The story of Hero-U: Rogue to Redemption is a difficult balancing act as we strive to make Shawn O’Conner a hero even though he’ll always be a rogue. Developing the game is like juggling hundreds of spinning plates at a time. Only when every one of them is in balance will the game be complete. After almost five years of development, it’s all coming together.

Now it’s time to begin outside testing and find out how much more still needs to be done.

There are a lot of steps involved in getting a game to outside testers. We’ve developed our own built-in bug reporter that catches both software errors and player reports. Once they appear in our testing database, we do “triage” on them and assign them to specific team members to fix.

Another step is contacting and working with backers. I’m starting out with a small subset of our Alpha Test level backers to be our first guinea pigs, er, brave testers. Once we have the reporting tool adequately tested, I’ll expand that by stages to all 350 Alpha Test backers. We are asking each tester to sign a Beta Test agreement similar to the ones used by Electronic Arts and other major game developers. We don’t want anyone revealing the mysteries too soon!

Once our first testers have looked at the game in sections, we’ll put everything together for a full Beta test accessible to all 2000 backers who chose a Beta Test level. This will be a full, feature-complete game, but it will probably still have some rough edges. Waves of Beta tests will continue until we are satisfied that Hero-U: Rogue to Redemption is ready for release.

The initial test build includes the first few weeks at Hero-U. We’ve disabled the second half of the game and all combat areas. Over the next couple of months, we’ll gradually open up additional areas of the game for testing. We’ll move from Alpha to Beta testing once we’ve revealed the entire game.

As always, keep your information current at https://hero-u-adventure-role-playing-game.backerkit.com and watch your email for your alpha or beta test invitation.

From Mystery to Discovery

This has been an epic game development process, and even when the game is tested and released, there will be much more to come. We will keep posting updates and stay in touch with the Hero-U community. Then it will be time to begin work on Hero-U: Wizard’s Way and the rest of the series.

Like the Starship Enterprise, once we complete our five year mission, there will be new ports, new destinations, and new crew to take us all where no one has gone before.