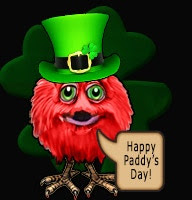 We’re coming up on St. Patrick’s Day. We’ll be having the traditional corned beef and cabbage because corned beef goes on sale this time of year, and we like it. Besides, we have our small connections to Ireland – Lori’s mother was an O’Brien, and I have Welsh ancestry on my mother’s side (close enough to Ireland for me J). We also love Irish traditional music.

Exciting things are happening at Transolar Games. Keep an eye on www.hero-u.net for current project news, discussion forums, and the Hero-U stores. We’re working on a redesigned version of the site, so visit frequently.

We’ve added a Café Press page (http://www.cafepress.com/herouniversitystore) with designs based on our new Hero-Unicorn mascot.

Also “Like” our Facebook page (https://www.facebook.com/TheSchoolForHeroes) for the latest updates, polls, and links to other fun things we find on the web. 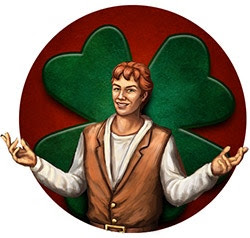 As you might suspect from his name, Shawn O’Conner’s roots are in Eire, the Emerald Isle, a place suspiciously similar to our Earth’s Ireland. The major difference is that magic in Eire is real – There are leprechauns, banshee and other Sidhe, and much more.

Eire is beautiful, but sometimes circumstances force people to leave the Emerald Isle. Among these emigrants was Shawn’s father. Shawn doesn’t remember much about his missing father, but he will learn much more during his time at Hero-U. Shawn has the Luck of the Eirish, but that isn’t always good luck.

An important way for Shawn to learn the secrets of Hero-U is to talk to other characters. Conversation is a big part of Hero-U game play.

Talkin’ about Most Anything

In Hero-U, conversation “is the thing”. Choices you make in dialogue affect the flow of the game, and determine the story you get from the game; change your choices and the story changes. Although dialogue is menu-driven as in Quest for Glory and Secret of Monkey Island, Shawn’s conversations are designed to feel more natural and less scripted because our system does not repeat any lines Shawn has already “heard”.

Let’s say you’re in your dorm bedroom talking with your roommate, Aeolus. You’re back there every night, so you’ll get a lot of chances to talk to him. You innocently ask, “What’s new?” and Aeolus launches into a new song he’s written. He wants to know whether you like it, and you might have a chance to “Answer Politely (use Charm)” or “Answer Cleverly (use Smarts)”.

Once you choose to be clever, you can’t go back and be charming on the same topic – That conversation wouldn’t make sense. Also, when you talk to Aeolus the next day, you will have completely different dialogue choices. This is not a game of “go down the menu and try everything”.

As in most films with strong storytelling – let’s say a Woody Allen rather than a Michael Bay film – dialogue is the main way the story is expressed in Hero-U. When Shawn talks to the other students and school staff, he learns more about them and the mysteries at the school. He also develops relationships, making both friends and enemies, and occasionally finds out about a “quest”. These are not MMO quests – “Go fetch me a pristine conch shell.”

Rather, as in Quest for Glory, Shawn learns about another character’s problem, and can decide whether to help them solve it. One of the students is having troubles with assignments; is it worth taking the time to tutor them? Another is searching for a lost treasure, but their map has been stolen. Help them or go after the treasure yourself? Each choice has its own consequences and rewards.

Writing ever-changing dialogue that expresses our story and character personalities is Lori’s biggest challenge on the Hero-U project. A single scene might have 20 or more conversations, each with multiple branches. Lori has designed them so that there are no “essential” branches, but each path reveals a different part of the story or character arc.

We will have some exciting progress to show over the next two months. The combat system is coming along nicely, and we will make a stand-alone playable combat scene in the beautiful – and now fully 3D – wine cellar. Of course, the demo won’t reveal all the secrets that will be found there in the game, but it will give you a feel for our major combat features including traps and throwing weapons. 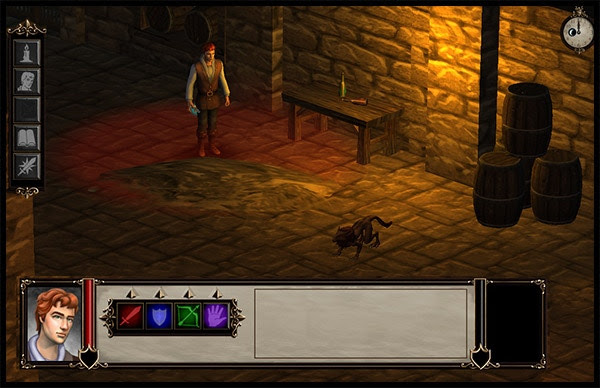 We’ve also completely redone the “breakin room” that we showed as our first prototype. As it will be the first scene in Hero-U, we don’t mind “spoiling” actual game text and play in the new demo. The art is all new, and I’ve added a considerable amount of text including a few of my trademark puns.

The new demos, along with a revamped web site and more frequent Facebook updates, are the prelude to a supplementary Kickstarter campaign we plan to start in mid-April. It is unusual to run two campaigns for the same project, but it makes a lot of sense for Hero-U. Two years ago, we had only concepts to describe, and very little artwork. We also planned to make a relatively primitive game based on the assets we had at the time. Our optimistic project estimate of Oct. 2013 was based more on what we could build with the Kickstarter funds than on what it actually takes to do a high-quality game.

Since then, we have made enormous progress. We now have artwork for most of the game, professionally modeled and animated 3D characters, music, combat, and a significant amount of writing and game content. This time we have much more than concepts to show! We hope we will gain many new backers and that many of our current backers will find project rewards worth having. We’ve also spent a lot of personal money on the project; having more backers and presales will make it easier to complete the project without worrying about how we are paying the developers.

Crowfall – A Kickstarter MMO Worth Supporting 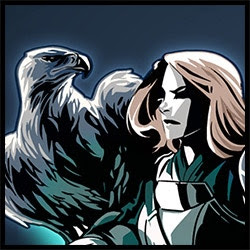 I’ve known Gordon Walton for many years by way of narrative game designers’ workshops. Gordon was a producer on Ultima Online, Star Wars Galaxies, and Star Wars: the Old Republic. Now he’s working with J Todd Coleman (creative lead of Shadowbane and Wizard101) to create a new type of MMO. The team also includes developers from every other major MMO, and even (as a consultant) Raph Koster, lead designer of Ultima Online, Everquest, and Star Wars Galaxies.

Instead of playing a stable of characters in a persistent world, you have a small number of “immortal” characters who participate in limited-time campaigns, each on a unique world. They promise “destructible” worlds using Voxel technology thanks to the worlds having limited existence anyway.

The game is Crowfall, and you can support it at http://kck.st/1FSZc6G. It has 9 days to go as I write this, and is currently at $1.2 million, 50% over the original goal. That’s awesome, but MMO’s are also extremely expensive to develop, so they can still use our support.