Hey everyone! This is just a very short update to let you all know that we have issued Steam keys for Cluck Yegger in Escape From The Planet of the Poultroid.

To keep the tech support down to a minimal, please read all of this post before heading over to get your Steam key.

The keys are issued to all $15 and up backers just as a reminder. To get access to your key, just log onto http://svrewards.com and click the rewards tab at the top.

If you can’t remember your password, you should be able to reset your password from the website. If you have any other problems logging in, you should forward your “Thanks to you, Two Guys SpaceVenture” funded e-mail from Kickstarter to pcj@andromedanpost.com. If you were a PayPal backers, just forward your PayPal paid receipt to that same email address.

WHAT ABOUT OTHER OUTLETS FOR THE CLUCK GAME

We are still talking with quite a few online game store outlets and have gotten a lot of interest. Currently the game is only available through Steam and Itch.io.

Even though GOG is very interested in the actual SpaceVenture game when it is released, unfortunately the Cluck Yegger mini game will not be available through them.

HOW BACKERS CAN HELP

If you’d like to help us, please spread the word to folks that they can buy the game right now for $2.99 here at http://cluckyegger.com (Our Steam Store) Another way you can help is that once you have your copy, and if you enjoy the game, please leave a review on our Steam Store page. Reviews on Steam make a major difference on whether or not Valve helps advertise the game to players in the store.

Lastly, we are giving out Steam keys to press and youtubers that might be able to help spread the word about the game. Feel free to help us poke at some of those folks about play testing the game, we’ll gladly provide them with access.

As mentioned, 100% of the proceeds from the Cluck Yegger mini game will go towards speeding up the process of finishing SpaceVenture.

We just completed work on the iOS version(release announcement in the near future) of the Cluck Yegger game and are moving full throttle into finishing SpaceVenture. I may personally spend a little time working on the Android version of the game, but my time will also be focused on getting SpaceVenture complete. We originally hoped to get the game out on iOS and Android at the same time, but we’ve had to prioritize.

This is a guest article by Judy Feng with additional material from Corey. Judy has been helping us add new features to our Composer story editor and will be working on other parts of Hero-U game play.

Since the previous update, another 600+ backers have filled out their BackerKit surveys. We still need over 600 surveys. It will be a great help if we can get closer to 100% as it takes me 5-10 minutes to manually resolve each incomplete survey – a week or two of time away from the game. We can’t realistically order t-shirts or other merchandise until all of the surveys are completed and resolved.

If you receive an email reminder to complete your BackerKit survey, please handle it or send email to support (at) hero-u (dot) net (sorry, but we’ve been getting many automated spam messages lately) to let us know of any problems you are having with the survey. You can also access your survey at https://hero-u-adventure-role-playing-game.backerkit.com/.

A recent question asked, “What is the scheduled release date?” I’ve been saying Spring (June) 2016, but since we aren’t in Alpha yet, Lori’s estimate of late Fall (November 2016) may be more realistic. We’ll try hard to complete the game earlier – it’s just as critical to us as to our backers – but we won’t release it until we’re satisfied that Hero-U is an excellent game with no major bugs.

What’s involved in making a game? Why does it take so long? The answers might surprise you – there’s a lot more than meets the eye. Let’s take a quick peek behind the curtains of Hero-U.

At the heart of every adventure game is the story. (You enter the room. What do you see? Who is there with you? What happens when you push the button?) The designer describes the scene and all of its possible interactions (and their consequences).

In an ideal world, everything would come together in a single glorious swoop. As the designer tells the story, the artists’ brushes (or styluses) would be a whirlwind of color; scenery and objects and characters would pour out of every surface, which animators would immediately bring to non-motion-captured life.

A symphony director would gesture madly (5/8 time! Now 4/4!) and a full orchestra and choir would respond in perfect harmony without needing a musical score. Programmers would capture all of this real-time data – story, art, animation, music – dynamically generate a world, shove it into a app, and… voila! A game would be born!

Sadly, game development in the real world moves far more slowly. Shockingly, it actually takes hard work and a lot of it. 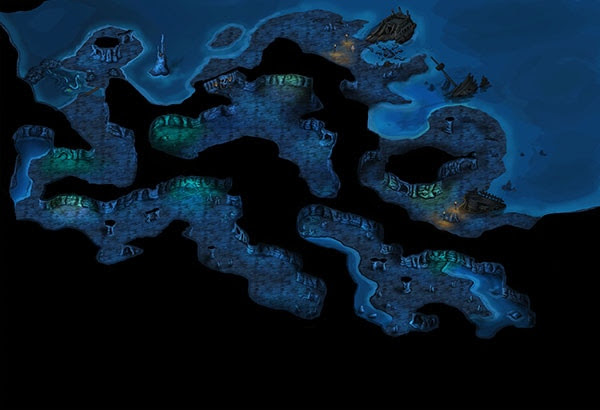 From the earliest design phases, Corey and Lori planned the Sea Caves as an important environment in Hero-U: Rogue to Redemption. One of Shawn’s classmates has a pirate father and is looking to recover his lost treasure.

But treasure is never so easily gained. Great reward requires great risk. Lori had visions of sea caves filled with diabolical puzzles, deadly traps, and dangerous creatures. Not least would be the Undead Pirates guarding the final treasure. Yes, it’s a trope, but a fun one! Hero-U would follow in the grand tradition of Tim Powers’ “On Stranger Tides”, Ron Gilbert’s “Secret of Monkey Island”, and of course Disney’s “Pirates of the Caribbean”.

Waving their hands and saying, “Zombie Pirates – make them so,” would have been nice and so very efficient. In practice, first the Coles had to lay out the caves, figure out how to make them work – the backgrounds were still 2D at the time, come up with puzzles around the caves and the pirates, work with an artist to get sketches, other artists to make them look real, programmers to make it all work, and another half-dozen or so steps. 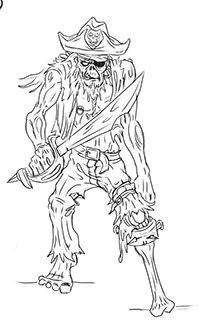 Paul Bowers sketched some zombie pirates and the pirate captain. Richard Aronson contributed some ideas about dead parrots and pirate hats. The cave maps went through four or five iterations as Corey, Michael, and finally Lori tried to create caves that would feel huge, but still be practical to paint and program.

By late 2014, they were ready to cut out the Sea Caves out of the game or make Hero-U episodic and move them to the second episode. The problem – the Sea Caves are a major part of the game story, and they’re Too Cool to Cut. Instead, Corey decided to run a second Kickstarter campaign to raise additional funding to keep Hero-U a full-sized game.

After multiple variations, here is the latest version of the Zombie Pirate captain, converted to 3D and animated by Al Eufrasio with textures from JP Selwood. The programmers will add the hat “at run-time”.

How do we even tell a story in a video game? Unity is great at showing things, but talking about them is harder. For Hero-U, we built a custom tool called “Composer” to describe the objects, participants, and interactions for each scene.

Composer is like a storyboard tool (https://en.wikipedia.org/wiki/Storyboard), but a bit more complex – it documents the direction of the player action, rather than the direction of the art. For example, the demo might be documented as one scene (the “Break-In Room”), multiple items or “props” (the desk, the bookshelf, etc.), at least two participants or “actors” (Shawn – aka the player – and the cat).

Composer also captures interactions. What happens when you click on the cat? You see a list of options to pet it, talk to it, kick it, or do nothing. This list is represented in Composer as a “script”, like “Interact with Cat”. The cat doesn’t say much, so it’s a pretty simple script:

All of these options – and the dialogue – are created within Composer. Composer persists everything (scenes, props, actors, scripts) as individual objects with relationships.

Additional custom code which translates the Composer data into a format usable by Unity, a 3rd-party game engine. When all of the game assets are ready (the art, models, scenes, etc.), we hook up our Composer story logic to our game assets. This means we can tell Unity to associate a Unity Scene with our Composer “Break-In Room” Scene, and a Unity cat model with our Composer “Cat”, so that clicking on the Unity cat will auto-magically trigger our “Interact with Cat” Composer script.

Of course, that’s a really simple case – you’ll meet that cat at most twice during the game, and it doesn’t say much that Shawn can understand. Writing believable conversations in our style of game is far more complex. Lori crafts custom dialogue for every character for each game event in each scene where they appear – sometimes that means 50 or more dialogue trees for one character.

Here’s a small excerpt from a Composer script that handles the meeting with the Rogue Instructor just after midterm exams:

And so on (this is just one small section of the conversation). Note the skill checks – if you haven’t been practicing your Charm, don’t expect to get away with flattery. However, even trying to use a skill unsuccessfully has a chance of improving that skill.

If you’re familiar with programming, you might be wondering why we put this data in Composer, instead of directly in Unity. Although developing Composer was very costly, we only had to pay that cost once.

Now Composer decouples storyboard and dialogue from development. Lori and Corey don’t need to wait for Unity scenes or models to be created before they can start writing, and artists / animators / programmers can work in parallel on different items. The less time we spend waiting, the more time we can spend working. And writing several thousand scripts takes a lot of time and work!

How Does This Sound?

One of the high points of any game comes when we add the music and sound effects. In the case of Hero-U, we were lucky to get much of our music from renowned composer Ryan Grogan early in the project.

One of our stretch goals in this year’s Kickstarter funding campaign was improving the quality and quantity of music in the game. We’re excited to announce that Ryan is currently in Budapest, Hungary working with the talented Budapest Scoring Orchestra to record a fully orchestrated version of the theme!

From art to programming to music and sound effects, everything in Hero-U goes through multiple stages and a gigantic amount of work. If we were sensible, the game would be much smaller, but we believe depth and fun trump practicality. We only have to build the game once, but we hope that many players will each play it multiple times when we’re done.

We hope you enjoyed this glimpse into the inner workings of Hero-U.