Happy New Year everyone! Let me flat out start by saying that we are still on track for 2015 being the release year of SpaceVenture! I’m crazy excited to say that, and I know it’s been a long wait for everyone. I hope you know, it’s been a long journey and wait for us as well. We have not been idle. Parts of the SpaceVenture team work on the game just about every single day, that includes weekends.

A WEEK OF VERY LITTLE SLEEP

We utilize a virtual office environment on team SpaceVenture that allows us to be located all over the world. Back in November, some of us had an opportunity to stay in a cabin located near Pigeon Forge TN for free. This gave some of us a chance to get together in the same place and do some team building exercises. Okay, not really, our team building consisted of working on SpaceVenture for an average of sixteen hours a day for seven days straight, but we did get a chance to take a nice little chunk out of the middle of the game, and move us towards the last third of the game.

As we were leading up to the cabin trip, Mark created a funny movie poster style piece of artwork that I thought I’d share with you guys. 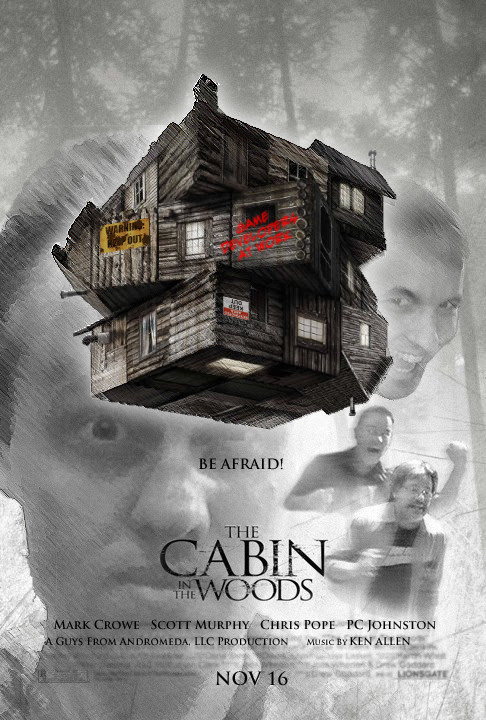 SOME QUESTIONS THAT ARE PERHAPS ON YOUR MIND

Are you guys broke?

Nope, still not broke and we’re doing just fine in that department. We have money to pay voice actors and money for all the rewards that have to go out, not to mention our artists, etc..

Is the project moving faster than it was?

Definitely! Seeing as it was the programming that was really holding up our project, I can proudly say, it’s not slowing us down anymore because we’ve got most everything we need built right into our custom event system. Not to mention the programmers we do have are all hard workers and very dedicated to the project. It feels so good to be able to write those words. 🙂

I still plan to post some demonstrations on the SV Rewards website to show off some of our event system in Unity (our game engine of choice). Be on the lookout for some posts from me(Chris Pope).

When is the game going to be released?

As mentioned above, we are still on track for having the game out sometime during this year. When I can give you estimated date/month/quarter information on this, I promise I will.

How far along is the game?

The project updates seem to be getting further apart. Is that how it’s gonna be from this point on?

Nope, and I wanted to personally apologize for how long it has taken for a new update to come out. There have been a lot of reasons for why it has been so long since the last update, I won’t get into details. I just want you to know that it should never be three months before you get new info from us.

When will the Kickstarter rewards ship?

The rewards will ship around the time that the game ships.

My address has changed since I pledged to this project. How do I let you guys know for rewards shipping purposes?

Don’t worry about letting us know any of that yet. We’ll send out info on that when the time comes.

NEW STUFF TO SHOW YOU

As always, I need to clarify something. EVERYTHING YOU ARE ABOUT TO SEE IS A WORK IN PROGRESS AND CAN AND WILL PROBABLY CHANGE BY THE RELEASE OF SPACEVENTURE. Nothing you are about to see is 100% final. Be advised though, that the changes will be for the better and will mostly be polish.

Another thing worth mentioning is that you’ll notice that we still aren’t really showing you anything involving the SpaceVenture UI system. That is because we still aren’t happy in that department. It would be pointless to show it to you because it is definitely going to change. Once we’re happy with the looks and intuitiveness of it, demonstrations will be posted in an update.

Now for the fun part of this update. The new stuff I get to show you all! We’ve got quite a few things to show you all and I hope you’re as excited about it all as I am.

First up, some music for you!

It’s been awhile since we had any music to let you all listen to, so I asked Ken Allen (the SpaceVenture music guy) if he could shoot something my way. He decided on “Rooter’s Theme”.  This little video show cases a little interaction with Rooter in SpaceVenture and let’s you hear the theme music Ken put together as well.

We’ve told you before that Ace stays with his usually cantankerous (not to mention cranky) mentor, Scraps. In the past, I may have showed you a mockup of the inside of his home. Here is an update! This scene is chocked full of SciFi pop culture references. Can you figure them all out? 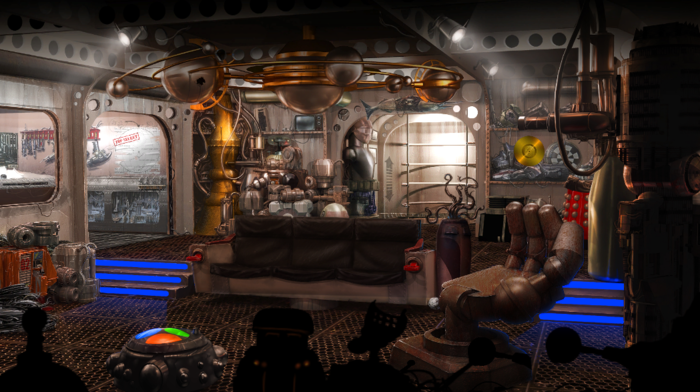 A COMFY COUCH TO LOUNGE ON

Some of you might remember an early concept drawing of Ace lounging out on the couch and getting caught up on his favorite shows on The Holotube. Well I put together a little video featuring the original concept art along with some updated in game footage of that scene.

JOSH MANDEL JOINS THE SPACEVENTURE TEAM AS A CAMEO WRITER

If you’re behind on Sierra/Video game lore, you might like to know that Josh Mandel was one of the majorly talented game developers that once worked at Sierra On-Line back in the day. He’s credited on games such as Freddy Pharkas: Frontier Pharmacist, Space Quest 6, not to mention other Sierra titles. He also worked directly with Al Lowe on the Leisure Suit Larry remake, Leisure Suit Larry Reloaded. 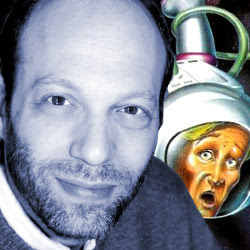 If you saw the above video, you’ll notice Ace watching the Holotube. As you may have guessed, you’re gonna hear more than just sound effects coming from the tube! Josh is writing some hilarious content to be played throughout Ace’s perusal of the Holotube channels. You will get to make Ace flip through those channels yourself.

If you haven’t already, you should listen to the Space Quest 6 youtube video I did will Josh awhile back. You can check it out here.

AN UPDATE TO THE GARAGE

The Garage scene I showed you previously has had some polish made to it. Here is an updated look for you! 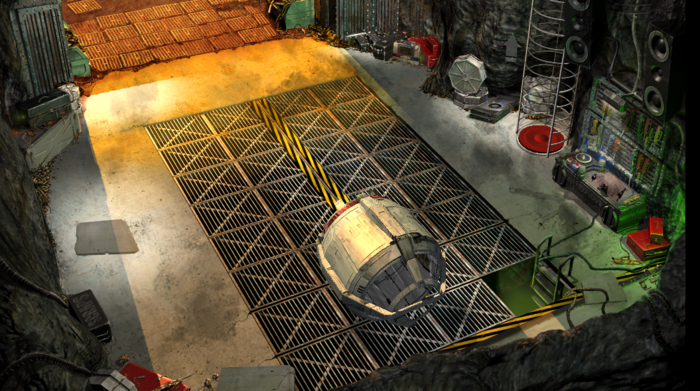 GOING UP AND THEN BACK DOWN

Speaking of the Garage, here is a small video demoing Ace and Rooter using the elevator. Any of you guys know the SciFi reference for that elevator? Be careful, you’re dating yourselves! I apologize for the jerkiness/framerate of this video.

Without being too spoilery here, I’ll just say that at some point in SpaceVenture you’re gonna need to prop Rooter up on a workbench to make some repairs. Here is a glimpse at that scene. 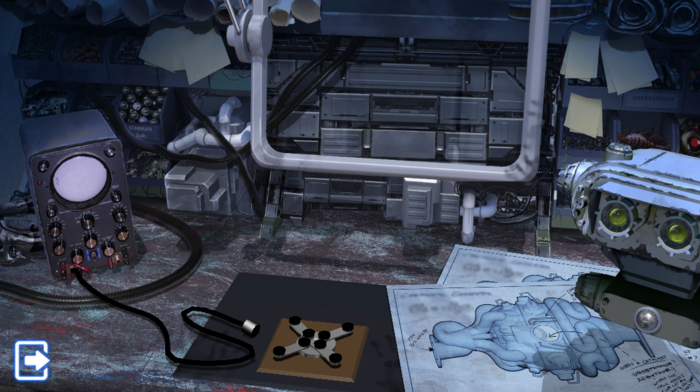 And here is a small video look at the Rooter Repair scene.

FLEAS ARE NO JOKE IN GAMES OR REAL LIFE

I believe I shared a story with you all a year or so ago about how my family cat had somehow gotten out of my house and was lost for a day. When we found him and got him back into the house, he was infested with fleas. Apparently he had gotten into the woods. Anyway, long story short, we put him in our basement which is where my office is and the whole basement had fleas all over it. I waged war on the fleas. A war that I lost, and was unable to work on SpaceVenture with the team for a couple of days. Anyway, I was telling the story to Scott and Mark while in a game design meeting. Next thing you know, Nano fleas were showing up as a puzzle in the game itself.

Without spoiling the point behind this sequence, here is an early look at controlling a nano flea in a portion of SpaceVenture: 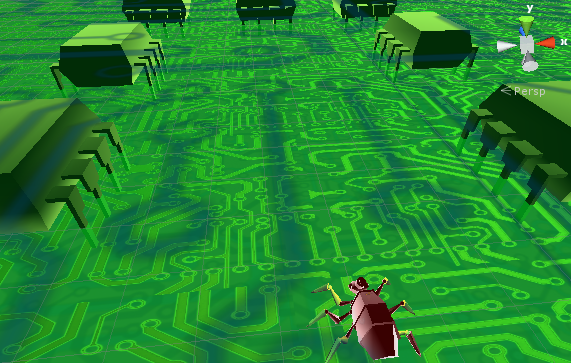 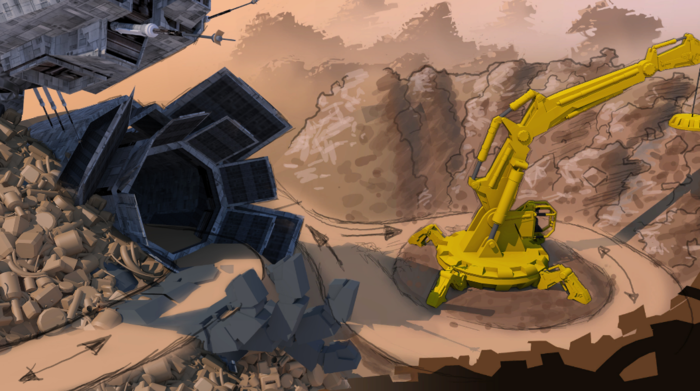 Here is a small video that demonstrates Ace and Rooter walking along the navigation paths of this scene. Keep in mind, this scene still has a ways to go.

INSIDE THE CRANE ITSELF

Also in the previous update, I mentioned that you would need to pull some things out of the scrapyard itself using that big magnet in the above scene. Here is a look at being within the interior of the crane.

NOTE: The UI controls that you see in the lower left of the screen are temporary. We just put that in there for testing purposes until the polished artwork goes in.

DELIVERING PARTS WITH THE MULE

What you just saw in the above video in which Ace can pickup parts out of the scrap yard isn’t quite as simple as it looks. There is a puzzle there that I don’t want to spoil. Just know, it’s not as easy as it may seem. However, once you do get the certain parts you need, they’ll need to be delivered to the Garage. Enter “The Mule”, which is the vehicle you’ll control that floats above the ground (think land speeder from StarWars: A New Hope) and is used for parts delivery.

Here is a small video I put together of Ace delivering a part to the garage.

WHAT THE HECK IS THAT THING

Speaking of parts! Here is a part that will play a major role in the game. I’m not allowed to give you any real information about it. Let your imagination run wild with this one. 😉 Of all the scenes in SpaceVenture, I am the most excited about the one below. I think everyone who played through most of Space Quest 3 remembers their first experiences in Monolith Burger. For me, it was a video game life changing experience that I’ll never forget. Getting to step foot in a greasy SciFi fast food restaurant was almost more than I could bare. We hope you’ll have that same experience when stepping into Taco Nova.

And here is a short video of the outside of Taco Nova:

I hope you all have enjoyed taking a look at some of what’s going on with the project! Looking forward to future updates.

This episode starts out with an immediate interruption by Chris Pope the SpacePope to bring you good tidings of great joy with how things are going on the SpaceVenture project. And it’s that time of the year — you all know what I’m talking about — the Space Quest Historian delves head-first into the pool of hard-ass, difficult-as-all-hell puzzles in a rant that, predictably, goes nowhere. Luckily, he’s not on his own, as Alan Luckachina steps up to deliver his own take on the subject in another phenominal bit of The Lucky Corner. Also on this show, you will find not one, but two impressive treats: Our music pal, Ken Allen, talks about music devices of old that never went anywhere, and the Historian plays his entire interview of Space Quest III composer Bob Siebenberg in its full, unedited glory! Merry whatever, ladies and janitors! 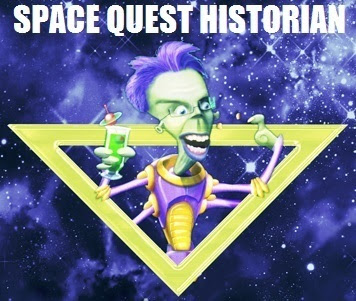