Check out the Pinkerton Road update – this time, a video with Robert Holmes and the music of games! 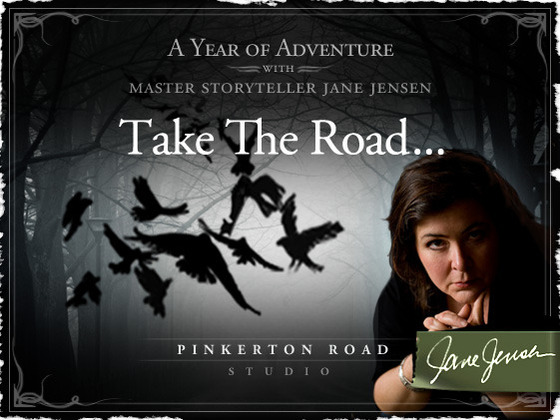 For starters, a new studio by Jane Jensen and her husband, and music composer, Robert Holmes entitled Pinkerton Road. After you check out the site and see concept art for Moebius, Anglophile Adventure and most importantly Gray Matter 2 you can stop by Jane’s Kickstarter Site and donate if you can! (For the kids, there’s also a Lola & Lucy’s Big Adventure! for more about that e-book!

If you’re reading this and you’re not sure who Jane Jensen or Robert Holmes are – well, first you’re probably on the wrong internet page, and may want to hit BACK on your browser. But in case you don’t know WHO they are but now you WANT to know – well, here – let me grab it from their About Page:

A 20-year veteran of the gaming industry, Jane Jensen is an internationally renowned game designer. Her Gabriel Knight PC adventure games won numerous industry awards and continue to be fan favorites in the adventure community. In 2003, Jane co-founded Oberon Media and went on to design best-selling casual games such as Deadtime Stories, Women’s Murder Club, and the recent hit Dying for Daylight. Her newest adventure game, Gray Matter, came out in November 2010 to great anticipation and praise. She most recently worked at Zynga. Jane has also written four novels. Fans are invited to connect with her on Facebook.

Robert Holmes is a composer, producer, musician, and strategic digital marketing executive. Having grown up as a musician and performer in the glory days of LA’s 1970s rock and roll period, Robert later moved from pop music studio work into film and television post-production and scoring. Seeing opportunities in the new computer game industry, he joined Sierra On-Line and was soon paired with designer Jane Jensen. His music has appeared in numerous video games, notably including Jane’s Gabriel Knight and Gray Matter adventures. Robert also performs with his daughter, actress / singer Raleigh Holmes, in the roots/folk band The Scarlet Furies.

Pinkerton Road was founded in 2012 to focus on story-based games for PC download, iPad, and Android tablets. The game studio is based in Lancaster County, PA. If you’re interested in learning more about the company or becoming an investor, please contact them by email.