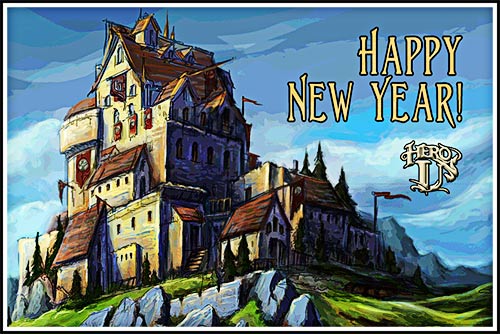 Happy New Year, everyone!  With the holidays behind us, we’re ramping up the development of Hero-U: Rogue to Redemption.  Lori and I have been brainstorming game and story ideas,the artists are hard at work designing and animating characters and monsters, and the programmers are experimenting with different isometric “looks” for the game.

I sent out backer surveys to all of the $50 and $65 level backers about two weeks ago.  Most of you have responded, but 78 backers have not yet answered their surveys.  If you are one of them, please visit your survey page soon so that we can send you your previous game key.

I plan to send surveys out to other backers this weekend (and possibly into next week for some categories).  Please respond to the survey when you get it.  We need the survey information to correctly fulfill your rewards, and especially to find out which add-ons you purchased.  If you have questions after answering the survey, feel free to contact me or Chris at support (at) hero-u (dot) net.  Note that I incorrectly listed this as “(dot) com” in a previous Update; if you sent any mail to that address, please resend it to the correct email.

Places to Go, Pages to See

We now have a forum at http://hero-u.net/forum/index.php to discuss Hero-U and our previous games. I’ve set up a few basic topics, but we’ll need many more.  The forum will be a place for Hero-U backers and anyone interested in the game to gather, ask and answer questions, and discuss the games.  Lori and I will drop in occasionally, but we won’t have time to answer everything.

As a reminder, you can still back Rogue to Redemption or increase your pledge through our “Kickstarter Store” page at http://www.hero-u.net/KS-store.  You can also buy merchandise and gifts related to Hero-U at our Cafe Press store – http://www.cafepress.com/herouniversitystore.  Purchases on both of these pages help support the project.  As of the end of December, we received $4,555 in pledges and upgrades on the KS-Store page, bringing the project total to $413,705.

Also visit the main Hero-U web site for more information on the project and team – http://hero-u.net/.

We’re working on a wiki for the developers and plan to put up a design blog on the hero-u.net site.  This will become more important as we get more PayPal backers, since they will not automatically be notified of posts here on Kickstarter.

I mentioned “Meriwether: An American Epic” previously.  This project is now in its final two days and looks like a nice mix of role-playing and historical storytelling.  Lori and I will be part of their final-day chat marathon on Google Hangouts this Sunday at 7:00 pm EST.

“The Hidden Crystal” is a project to publish an heroic fantasy novel. It’s getting some beautiful illustrations from JP Selwood, one of Hero-U’s talented artists.  This project is just starting out, and has a very modest $2,000 goal, but needs more people to hear about it so that it can reach its goal.  Daniel Gimness, the author, says, “The plot is right in-line with classic Sierra storytelling and artist John Paul Selwood (who worked on the Sierra AGDI remake games King’s Quest I, II and III, Quest for Glory II, as well Mage’s Initiation, and Hero-U) has illustrated the project.”

Back in the early days of paper-and-pencil role-playing, one of the competitors to Dungeons & Dragons was a game called Tunnels & Trolls.  It featured a simplified combat system and a light-hearted approach to role-playing.  The original authors (including Rick Loomis, Ken St. Andre, and Liz Danforth) want to make an updated version of the game books.  If you like paper RPG’s, check out “Deluxe Tunnels & Trolls“. They just launched the project yesterday, and are nearly at their goal, so now it’s a race to see how much extra they can deliver with the game.

Read About It Here!

Leisure Suit Larry In The Land Of The Lounge Lizards

Publisher: Two Guys From Andromeda
Release: February
Link
A new sci-fi comedy adventure game from the creators of the Space Quest series. It was successfully funded to the tune of ‘a lot of money’ thanks to the combined powers of nostalgia and Kickstarter.

Hero U: Rogue To Redemption

Publisher: Far Studio
Release: October
Link
Wouldn’t you know it, it’s another successful Kickstarter campaign from the creators of a classic adventure series – this time Quest For Glory. A 2D point and click adventure game, unsurprisingly, with a snappy sense of humour.