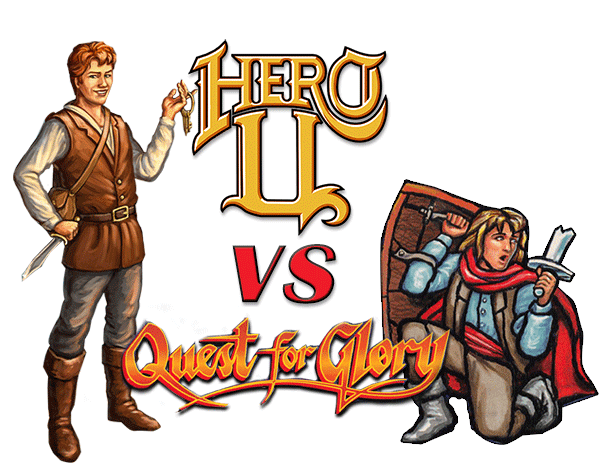 When we created Quest for Glory, we set out to tell a story with the best features of both adventure games and RPGs. We didn’t set out to change the world – we just wanted to make better games – but the result was the first role-playing adventure game.

Adventure game characters explore the setting and solve challenging puzzles. The characters themselves don’t change much.

Role-playing game characters explore complicated labyrinths, mash monsters, and collect treasure. Their stats improve throughout the game, and they get better equipment, but the characters have more numbers than personality.

In a story, characters change and grow as the result of overcoming conflicts. There might be some tricky puzzles to solve, and the characters might become stronger, but the important thing is that they learn something new.

Quest for Glory games – and now Hero-U – combine all three types of game play and storytelling. We think they belong together. 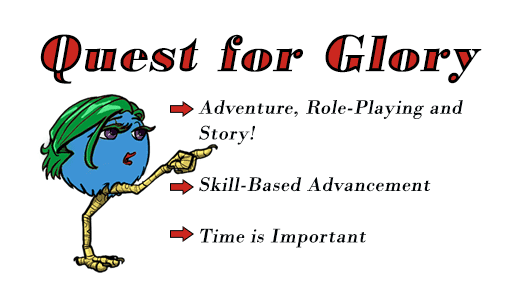 Mixing adventure game exploration and rich stories with skill advancement and combat was our biggest innovation, but we didn’t stop there.

Quest for Glory used a unique “practice makes perfect” skill advancement system. Other RPGs had level-based advancement where characters gained better abilities only when they reached a new experience level. Our skill-based approach let players focus on the skills they wanted to improve.

The passage of time was important in Quest for Glory. If you left the safety of the town at night, you met a different and tougher class of monster that what ran around during the day. If you went too long without eating, your character would become hungry and more easily tired. Starting with Quest for Glory II, we introduced story events that changed the game over time.

For Hero-U, we are again using a skill-based character system. This time skills are just as important in school as it is in the dungeons. Shawn uses and develops his charm, street smarts, and moxie in conversation, his agility and combat skills by fighting monsters, and his stealth and tool use by acting like a rogue.

Time is even more important in Hero-U than in Quest for Glory. As a student in the Hero University, your character needs to attend classes and pass exams between adventures. Shawn has to make some difficult choices about how best to use his time.

Choice is a major theme in all of the Hero-U games. Conversations are more advanced than in Quest for Glory – other characters respond to Shawn’s attitude, and their relationship with him, as to his words. Each time you play Hero-U, the story, dialogue, and relationships will change in subtle ways. 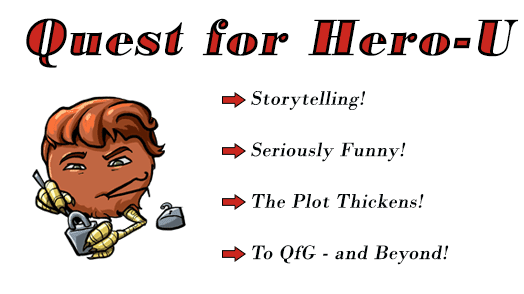 The biggest strengths of our Quest for Glory games were the storytelling and the balance of serious stories with humorous situations and plentiful puns. Our goal is to continue those traditions in Hero-U with new and exciting stories and plenty of fun moments to help make the serious ones more meaningful.

Each Quest for Glory game had its own story – “coming of age” in the first game, experienced adventurer in the second, peace-maker in the third – all part of the greater story of the hero. In the final game, he could even become a King.

In Hero-U, Shawn O’Conner is again a young man with no real experience, but his coming of age has a difference. All we knew about the player’s character in Quest for Glory is that he wants to become a hero. Shawn doesn’t start out wanting to be a hero; he just wants to survive. But Shawn also has a past cloaked in mystery. In Rogue to Redemption, Shawn will discover his heritage as well as create a new destiny.

The Hero-U stories are in layers. World-changing events occur inside and around the school while the player character is trying to get an education. Each game reveals more of these events, and each character is involved in parts of them. What happens to one character, and how the player has that character act, affects the future games.

Hero-U is our spiritual successor to Quest for Glory. We are using modern technology to create even stronger stories, with more meaningful choices. These games are our response to fans who asked for more games like Quest for Glory. Thank you for being part of this new series. The best way you can help us make all of the planned Hero-U games is to spread the word to other adventure and role-playing gamers. Please share this post and the new Kickstarter campaign (https://www.kickstarter.com/projects/transolargames/hero-u-adventure-role-playing-game) to your friends and networks. The hardest part about Kickstarter is getting the word out to players who would enjoy our games.

Also please support our Steam Greenlight campaign at http://steamcommunity.com/sharedfiles/filedetails/?id=444566574. We are 98% of the way into the Greenlight Top 100. Voting for Hero-U, marking it as a Favorite, and sharing the page will help us make the game successful.

Thank you for helping us make Hero-U: Rogue to Redemption a success.