Tobiah Marks recently asked me to do a podcast for his “Be Indie Now” web series. For some insight into the indie development side of the Hero-U project, check out the result at http://www.tobiahmarks.com/2014/04/be-indie-now-24-hero-u-rogue-redemption/ or visit Tobiah’s site at www.BeIndieNow.com to learn about other indie game projects.

In case you missed it, Lori and I were also on Up at Noon with Greg Miller in February. You can view the show at http://www.ign.com/videos/2014/02/17/persona-4-meets-dungeons-dragons-hero-u-on-up-at-noon.

Chaos Can Be Cool

When Lori and I started working with Sierra in the late 1980’s, the company was very informal. We didn’t sit down in a conference room for meetings – There were no conference rooms. Instead, two or three of us would stroll on the roof of the building or around the parking lot until we knew how to solve the issue of the day.

A few years later, Sierra set up a one-day training session to help the middle managers to work better with our teams. I had been promoted to Programming Manager for the educational game group, so was invited to the workshop. For one of the exercises, the trainer took each of the team leaders aside and instructed us in the management style we should use. I was the Authoritarian manager – My assignment was to dictate every detail of the project and brush off any suggestions. The second team leader was Democratic – She was told to listen to the team and then direct the project. The final team was Laissez Faire – The team leader was to dither and not make any suggestions, nor do anything to promote the team members working together. It was pure anarchy.

The expected winner was of course the Democratic team, one in which there was solid leadership, but everyone had some agency. The *actual* winner on both technical and artistic criteria was the Anarchist team. The trainer was astonished. He said he had been running these workshops for over 20 years, and the Laissez Faire teams never won; they fell into chaos and got nothing accomplished. Why was our workshop different?

I looked at the trainer and said, “Anarchy? That’s pretty much the way we make all our games here. We thrive on chaos!”

Anarchy might not be ideal for getting a game out the door, but it does promote agency and creativity by every team member.

All Around the World

Hero-U: Rogue to Redemption development is far more challenging than developing our games at Sierra. We didn’t start with a multi-million-dollar development environment hand-tuned for making adventure games. We don’t have any full-time team members because the budget doesn’t allow for them. Communication is sometimes difficult because our team members are located all around the world – Australia, Virginia, Florida, Connecticut, Washington, and several locations in California. How could we all work together effectively?

Sometimes the answer is unfortunately, “We can’t.” In those cases, we’ve dropped team members or they’ve left on their own. And sometimes we have temporary issues because long-distance communication is hard. We decided to use a multi-tiered approach to keeping everyone on the team “on the same page”.

The Sierra workshop provided part of the answer – If each team member is highly talented and motivated, we can trust them to do their parts of the job well and to infuse them with their own creativity and talent.

We are also taking advantage of several network technologies that didn’t exist in the 1990’s. We have two weekly team meetings via Google+ Video Chat. One is mostly for the artists, and one for programmers, but everyone is invited to both meetings. We use Google Drive and Dropbox to share documents, and Trello to track project tasks. Occasionally team members phone us with specific questions. For anything less urgent, we send email either to specific team members or to the entire team.

Down in the Dungeon

Our approach is inefficient – I would never recommend it for a manufacturing operation. But it is workable for creating an original computer game. One of our artists remarked recently that he is really enjoying the sense of “agency” and creative freedom he has on Hero-U, as well as the lack of deadline pressure.

Yes, we could ship the game sooner if we insisted on tight deadlines, but we do not think that approach leads to great games or good team morale. Lori and I gave talks on “The Fun Factor” at early game developer conferences. One of our points was that the team must have fun – The attitude of the team comes through in the final game.

As it is, our team members frequently surprise and delight us with the little unscripted touches they have added to their work. John Paul Selwood painted an unexpected magical plant that we did not specify in one of the school offices. It is a perfect Easter Egg in the game, and I will have a great time writing descriptive text and player actions for it. Our latest art team member, Chris Willis, is doing a fabulous job imparting the right mood and detail into the Catacombs and other underground areas of the school. Paul Bowers and Eric Varnes have done a fantastic job creating backer portraits that will add to the game instead of being obtrusive.

We are basing an entire dungeon area on work from one of our high-tier backers. If we implemented his entire scenario, it would be a game by itself, so we adapted selected portions of his design to fit into Hero-U. This collaborative approach adds more richness to the game than we could invent by ourselves, and is stronger because we can adapt everyone’s work to fit our overall design framework.

Does the development approach affect the experience of playing the game? Yes, it does, absolutely! Read “How Music Works” by David Byrne (of the “Talking Heads” musical band) for some insight on how the environments of the performers and listeners/players change the music/game experience.

Agency, creativity, collaboration – A game is stronger when many creative minds are free to do their best work… as long as someone is there to make sure all of those great assets work together consistently. 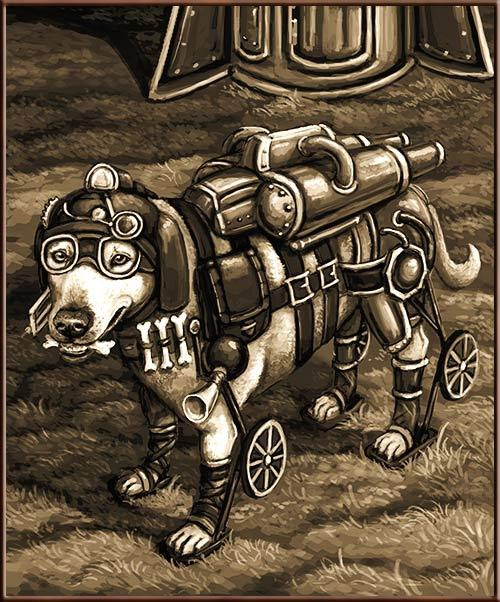 Portrait of a Hero-U Backer

Some Other Great Projects

Two of our favorite artist/writers – Phil and Kaja Foglio – are in the final days of a Kickstarter project to print the latest volume of their wonderful Girl Genius graphic novels. Consider supporting their creative efforts at https://www.kickstarter.com/projects/girlgenius/girl-genius-volume-13-agatha-heterodyne-and-the-sl. Girl Genius 13 has met its funding goal, but has some nice stretch goals. 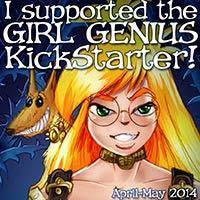 Mark of the Old Ones (https://www.kickstarter.com/projects/1168767162/mark-of-the-old-ones-a-metroidvanian-adventure) is more of an action game than a graphic adventure, but we think it is worth supporting. The art is luscious, intriguing, and beautiful; and the concept and story line are original and intriguing. The tentacle-based game play should make an interesting variation on traditional run/jump/shoot platformers. Mark of the Old Ones has received a little over half its goal with one week to go, so it will need some extra support.

Jane Jensen, the creator and lead designer of Gabriel Knight, has completed Moebius, her first Kickstarter-backed adventure game. Read more about the project at https://www.kickstarter.com/projects/1005365109/jane-jensens-pinkerton-road-2012-2013-csg/posts/811469. This update tells you where you can buy the game and get a nice discount.

Incidentally, Gabriel Knight 3 contained one of the most infamous puzzles in adventure game history (unfortunately overshadowing the wonderful writing and better puzzles in the rest of the game and series). I’m spoofing it in one of the Hero-U puzzles just because I can.

Quest for Infamy, a project inspired by our own Quest for Glory series, announced a release date in its latest update (https://www.kickstarter.com/projects/1992695780/quest-for-infamy-an-adventure-game-by-infamous-que/posts/827735). The game sounds fun. Creator Steven Alexander is an active and influential voice in support of adventure gaming. He deserves our support.

In case you missed it, here are some other places you can read about and continue to support Hero-U: Rogue to Redemption.

Thank you so much for your continuing belief and support of our efforts to make the world a little more Heroic, one game at a time.