A month has gone by since the last Update, and we have lots of news. Shawn O’Conner wishes all of you a Happy St. Patrick’s Day!

Chris and I have caught up on Backer Surveys received through March 10.  We sent out Steam and GoG keys to everyone who requested them as part of their backer rewards. If you sent mail to Hero-U Support or filled out a survey, but did not receive your “past games” key, please send a new message to support (at) hero-u (dot) net. (Sorry to write it that way, but we really don’t want to attract the attention of spambots.)

We’ve made quite a bit of progress on the art and music fronts. Ryan Grogan continues to delight us with his spot-on tunes. He’s probably getting a bit of a swelled head by now, but he deserves it. 🙂  All of the artists are giving us beautiful work. Hero-U: Rogue to Redemption is an indie game, but it will look professional. After all, everyone working on it *is* a professional – We have well over 100 years in the game industry between us. Ok, so maybe we’re professional dinosaurs, but hey, dinosaurs are cool! 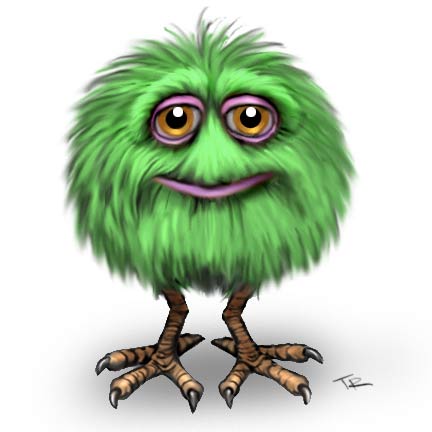 Terry has been working with a toy company to specify the toy Meeps. We’re going to make them in two colors – light blue and light green – and we’re ordering extras so that we can offer them in the Hero-U store. Here’s our artist conception of a Green Meep and the manufacturer’s sample of the Blue Meep design. They may change a little before we get the final versions. 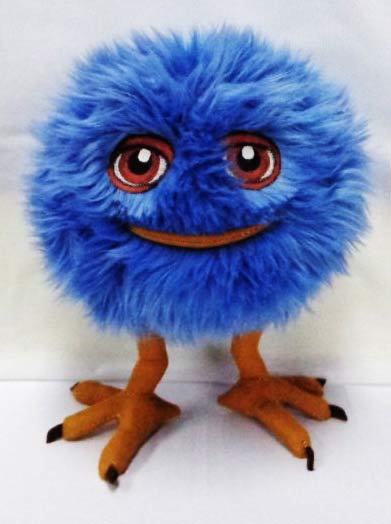 Lori and I decided early in the project to work with independent contractors rather than employees. This has allowed us to control costs by paying only for the actual work that has been completed at each stage. The downside of that decision is that we have much less control over the pace and amount of work from contractors.

I’ve been a “part-timer” myself on the game design because a large part of my time has been devoted to administration and reward fulfillment. I knew all along that those would take a lot of my time, but I didn’t realize just how much. I’m now through that phase and participating much more actively in working with Lori to design game systems. Recent eye surgery (cataracts) is also making a big difference, now that I can read the computer screen without a magnifier!

The good part of this is that we are burning through the Kickstarter funds very slowly. The rough part is that we are also building the game slowly. In particular, both of our team programmers have dropped out to pursue lucrative full-time contracts elsewhere. We are in the process of doing a “partial reboot”, bringing in a full-time lead programmer, and redesigning the software architecture. This is allowing us to further refine and improve the game design, but it means that we have zero chance of making our original October ship date.

We still plan to use part-time contractors for much of the final game programming. Are you a strong Unity and C# programmer? Would like to contribute to the development of Hero-U: Rogue to Redemption. Oh, and are you a code monkey who is happy to work for bananas because bananas are so tasty? That’s pretty much what the rest of the team (including Lori and me) is doing. If so, please send an email with a resume (CV) and information about your availability and contract rates to jobs (at) transolar (dot) com. Actually our rates are highly competitive, compared to say fast food restaurant and warehouse store work.

We will keep all of you informed as we move forward with the project. I don’t want to promise a specific date for Hero-U release at this point, but we are 100% committed to shipping it as soon as it is a great game. 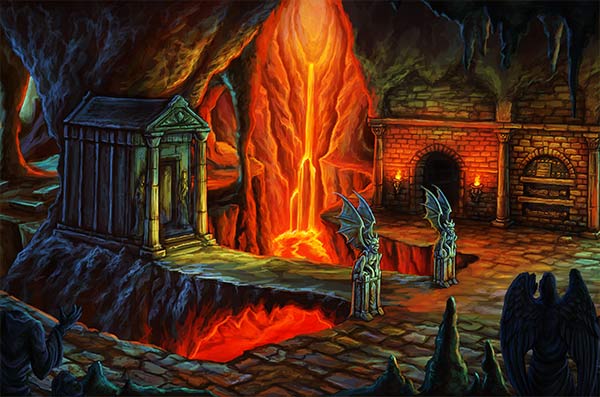 My wallet has grown thin this month as I found many awesome projects to support.  Here are three important projects that are closing in a few days.  Please check them out and back the ones that interest you.

Var and the Vikings (http://kck.st/VQHyLz) has just one week to go. So far it has raised $11,000 towards its modest $31,000 goal. It would be a real shame if this project fails. Think Lemmings, except you get to teach your lemmings how to live. Var is a fun combination of puzzle game play with the chance to experiment with game-style artificial intelligence decision trees. Back this project and tell your friends to check it out. They have a nice project demo (Firefox browser only), and the development team are nice people – They came up for a visit a couple of weeks ago.

Mage’s Initiation (http://kck.st/W7OBdj) also has one week to go. This is a Quest for Glory inspired hybrid adventure / RPG in which you play an elemental mage. Depending on your specialty (Earth, Air, Fire, or Water), you will have unique puzzle solutions and combat abilities. The team has just added a playable demo of the Fire Mage; you can download it from http://www.himalayastudios.com/downloads/Mages_Initiation_Demo.exe. I managed to work through the puzzles with a little head-scratching, but couldn’t quite survive the first combat test. Maybe they’ll add a turn-based mode as in Hero-U. 🙂

Weregeek (http://www.weregeek.com/) is one of Lori’s and my favorite webcomics, and now it has its own Kickstarter (http://kck.st/VeeGKq). Alina Pete, the very Canadian creator, is a cool person in addition to an excellent artist and very imaginative writer. The idea behind the comic series is that ordinary people turn into Weregeeks – sometimes with amazing powers – as a result of their secret lives as role-playing game addicts. Or maybe it’s the full moon or something. Anyway, great stories up there for free, and it’s up to us – by supporting her Kickstarter – to make it possible for Alina to keep telling them.  There are just three days left in the Weregeek campaign.

Those are the “little people” with great small projects deserving your attention. There are also two new blockbuster games that many of you will enjoy if you have anything left in your wallets.  (Please help the little projects first – Your backing will make a huge difference to them.)

Shroud of the Avatar (http://kck.st/WahMzs) is Richard Garriott’s (“Lord British”) spiritual successor to both the Ultima series and Ultima Online. At 91% of its million-dollar goal just a week into the campaign, this one is definitely happening. The team is already well into development; the project page shows a number of videos showing game play. It’s a highly-ambitious game that is trying to provide a solid single-player experience as well as the fun of gaming with friends and a few potential future friends. Can Lord British pull this one off? Join the backers and find out.

Torment: Tides of Numenera (http://kck.st/13F7hZm) is the second big Kickstarter from Brian Fargo and his inXile Entertainment team. Previously they funded Wasteland 2 at almost $3 million. Ten days into their new campaign, they are close to passing that. This one is the spiritual successor to Planescape: Torment, one of the best D&D-based computer RPG’s. They are teaming up with Monte Cook, who raised over $500,000 back in September for the paper gaming version of the Numenera system. (That one had a $20,000 goal!!) Torment: Tides has the potential to be a terrific story-based RPG.

That’s enough for this Update. We’ll see you all next month with more art and other information on the progress of Hero-U: Rogue to Redemption. 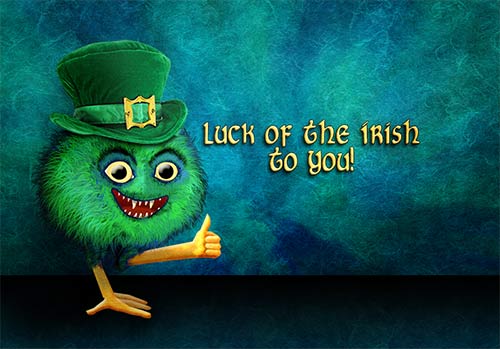