Your Own Personal Story

One of the things that makes adventure games special is the emphasis on story. You aren’t just running around solving puzzles, you’re participating in a shared-storytelling experience. Obviously story and characters are essential features of Hero-U: Rogue to Redemption.

Throughout the game, you will learn small threads of the story. How you put them together creates the tapestry that is your version of the story. Some sections may be incomplete until you play the game several times, because the way you play Shawn helps direct the story.

There are story threads as early in the game as the opening “break-in house” scene. Some of them are subtle, but designed to raise questions in the player’s mind. Clearly Shawn is special – how many young men do you suppose the Chief Thief pulls off the street and assigns to a special test with no training? Who is the man in the alleyway, and why does he care what happens to Shawn? Who has sponsored Shawn to attend Hero-U, an elite University that does not normally cater to street people? 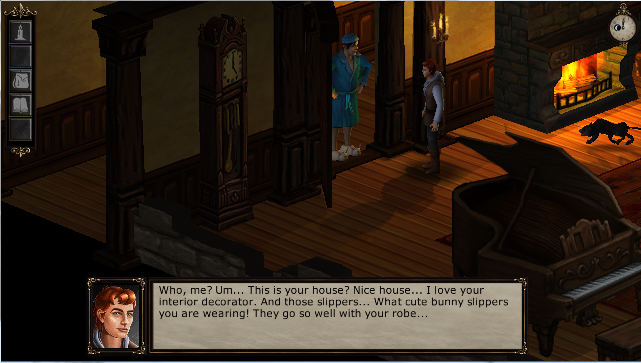 A Bad Time to Babble

Inside the break-in house, why are shamrocks a theme in a game set in the Mediterranean? What do you learn about Shawn by examining the piano or the globe? What is going on with that safe that looks specifically designed to thwart expert thieves? Why does Shawn think about his mother, but never mention his father?

The answers to those questions are intentionally ambiguous for several reasons. One is to set up later plot development. Another is point of view – in Rogue to Redemption, you play as Shawn, and he doesn’t know the whole story.

There is also the nature of “interactive fiction” – we can’t tell you the whole story at the beginning because we’re writing it together. Each decision you make in the game affects some part of the story and character development. It even helps create the style of the game.

Choose Your Own Adventure

Is Hero-U a suspense thriller in which danger lurks around every corner, and Shawn must keep on his toes to avoid disaster? It could be if you play it that way. The monsters are waiting.

Is Rogue to Redemption a coming-of-age story where a young man of modest means improves himself and “becomes somebody”? Yes, it is, to the degree you make it that story. Even the subtitle implies that, but the story doesn’t have to go that way if you choose otherwise.

Is Hero-U about the relationships between characters, possibly even a romance story? It can definitely be that if your focus in the game is talking with other characters and romancing one – or two or more – of them. Traditional romance or alternative relationships? Possibly – it’s up to you.

Is Hero-U a mystery story in which Shawn and the player consider many subtle clues and try to unravel the secrets of the past and the present? The clues are there – what you do with them is your choice.

Maybe Hero-U is a contest where you try to maximize Shawn’s attributes, skills, and wealth while winning the Rogue of the Year contest.

There are also stories (“character arcs”) for other characters besides Shawn, and you have some influence on them. Each character has a back-story, personality, goals, and challenges. Sometimes Shawn can help with one of those challenges and have an effect on the outcome of the character’s story in Hero-U. Examples? That would be telling. 🙂

Whatever your adventure or role-playing gaming style, we think you will find the experience of playing Hero-U fascinating and challenging. You’ll want to watch your friends play too, because each of you will have a different experience each time.

There’s only so much I can fit into these updates. To learn more about Hero-U, and see some of the beautiful game art our team is creating, visit Lori’s “What’s New At Hero-U” blog at www.hero-u.com/leaders/.

Each day through the end of the Kickstarter campaign, we are giving away a new game art desktop background. Visit every day to get your free wallpaper, and check the older posts to learn more about Hero-U. Don’t forget to click on the Share buttons at the bottom of each post; we’re coming down to the wire and want everyone to know about Hero-U. 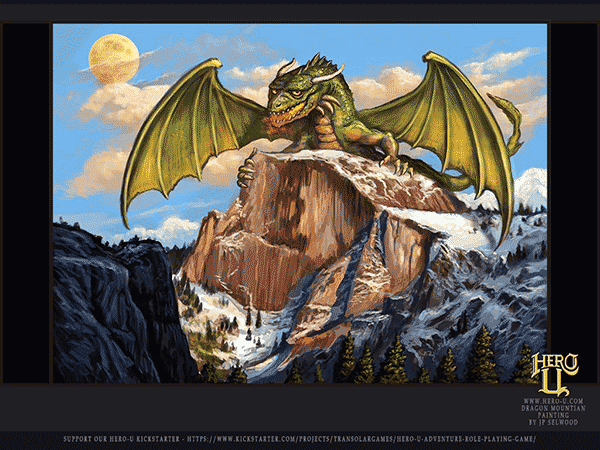 I’ve added two new digital add-ons to the Kickstarter campaign – $20 for an additional copy of the game, and $5.89 to join the AGL 589 – The Adventurers’ Guild Local 589 created by our backers.

Shouting Across the Internet

We all want to see more games with great story and gameplay. That’s why I make a point of sharing other Kickstarter projects here, and why we all support each others’ campaigns. It’s really important for you to share Hero-U and other interesting games on Facebook, Twitter, reddit, and other sites. Talk about them in our comments, and about us in theirs (but be respectful in both cases!).

Brian Fargo and inXile Entertainment are currently running a major campaign for the Bard’s Tale IV. They are asking $1.25 million and have promised to add at least another $1.25 million from the company coffers to make a great game. Based on their first in-game trailer, the new game looks much more immersive (and beautiful) than the original Bard’s Tale games. I played the first one in the mid 1980’s even before I broke into the game industry. Support Bard’s Tale IV at https://www.kickstarter.com/projects/inxile/the-bards-tale-iv.

Ron Gilbert (@grumpygamer) and Brian Fargo (@brianfargo) recently tweeted about Hero-U and personally pledged to this Kickstarter. Thanks, Ron and Brian! I’ve mentioned Ron’s Thimbleweed Park (http://blog.thimbleweedpark.com/) as well as Brian’s Torment: Tides of Numenera (https://torment.inxile-entertainment.com/) in updates to our first Kickstarter.

Previous celebrity supporters have included Jane Jensen Holmes and Robert Holmes of Gabriel Knight and Moebius fame (http://pinkertonroad.com/); Scott Murphy and Mark Crowe of Space Quest and SpaceVenture (along with Chris Pope of SpaceVenture) (http://guysfromandromeda.com/); Josh Mandel and Al Lowe of Freddy Pharkas and Leisure Suit Larry: Reloaded (https://www.replaygamesinc.com/); and many others too numerous to name. We really appreciate the way game designers promote and support each other.

These aren’t just gaming celebrities – they’re good people who deserve respect and support. All of them care about making great games and are good at it. Keep an eye out for their upcoming games and buy a copy, or give them some support on their web sites. Making games is a very tough business, and support from our fans is one of the main things that makes it worthwhile.