Guys From Andromeda LLC is super excited to welcome Sierra On-Line and Space Quest 4 composer, Ken Allen to the project as the main composer for the game! 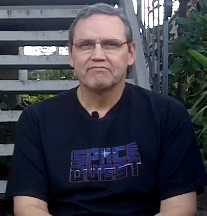 Here is a short bio on Ken Allen:

Ken worked at Sierra 89 – 92, and created music for over a dozen games including installments of the King’s Quest and Space Quest series. After leaving Sierra he continued to compose game music for such companies as Interplay Productions, Tsunami Media, Software Toolworks, Futurescape Productions and Accolade Games. Most recently he was a producer on the team that developed the highly aclaimed MMO, Rift, and the expansion pack Rift – Storm Legion. When he heard the Two Guys From Andromeda had reunited, he was compelled to get involved. He feels that some of his best work was for their games.

Want to know more about Ken Allen? Check out the podcast that Chris Pope did with him!

Ken Allen with Chris Pope on the Guys From Andromeda Podcast

Remember the Space Quest 4 intro? Ken Allen did that, check out the intro video, it features the Roland MT-32

We know one of the big questions on everyone’s mind is “When are you going to release SpaceVenture?”. Well, we have said this publicly already but wanted to state it here in an update as well. As much as we would love to have the game out this February, it just won’t be ready by then. There is still a good deal of work that must be done before the game will be ready for everyone to play.

I think everyone will hopefully agree that as long as we’ve all waited for a new game from the “Two Guys”, we don’t want a game to come out that isn’t finished or polished yet. We want to produce a game that fans will love and enjoy. The type of game that will cause a word of mouth virus to take over and spread like wild fire. No I’m not saying we’re planning to infect you with a virus! But we hope word of the game will go viral so that more and more people will want to enjoy the game. This also brings to the table the possibilities of sequels that can be funded without having to ask for money from you fine people on Kickstarter 🙂 We are shooting for a mid-year release but want to make it clear that we won’t set a date in stone until we are 100% in agreement that the game will be ready by then. Thanks again for your patience and support on this. We are still discussing sending backer items out early. As of right now, we are still planning to ship the backer items when the game ships. Most everyone receiving backer goods are also receiving a boxed copy of the game. Financially we are trying to avoid shipping out things separately, which adds to shipping cost. We have gotten quite a few emails from backers letting us know ways around this issue, such as asking backers to pay for early shipping. This is being discussed, but as of right now, the plan is still to ship things out when the game ships. Thanks for your understanding.

What about GoG credits?

We have purchased GoG credits and will be making an announcement about that very soon. Please continue to be patient, and we’ll have those out to everyone in the coming weeks.

As you may have guessed, the game creation is still coming together and we are making a good deal of headway in the programming for the game. Scott and Mark have come up with some truly lovable characters that we can hopefully announce to everyone soon. We did want to share this video of the Scraps character being modeled:

Soon we will be showing you all some live footage of game-play for SpaceVenture! Please continue to stay patient! We are really excited about everything that is coming together and can’t wait to show everyone! Mark Crowe, Scott Murphy, and Chris Pope will all be appearing at SDCC 2013! We will have a table set up there helping to promote SpaceVenture. We’re also hoping to have a panel there. If you have any knowledge/connections with setting up a panel at SDCC, and want to help, please email Chris AT Guysfromandromeda DOT com.

Where can I get info about coming? Right Here

Any other conventions? As of right now, SDCC is the only confirmed convention for Scott, Mark, and Chris to be at. However Chris will be appearing at Momocon in Atlanta March 8th-10th. As well as Alabama Phoenix Festival May 24th-26th.

We are also hoping to go to PAX 2013. (Seattle) If you’d like to help get that arranged please email Chris AT Guysfromandromeda DOT com

The SpaceVenture pledging options are coming to a close. We have had a good run and met not only our Kickstarter, but one of our stretch goals. As you can imagine with the game coming along, we’ve had to set a cut off point for the stretch goals on our website. The cut off date for this will be February 1st 2013. If you’d like to upgrade your pledge to get some of the really cool backer items, the time is running out. Go to http://guysfromandromeda.com and up your pledge before February 1st.

But what happens after February 1st?

We are pleased to announce the official Guys From Andromeda store. The store will contain different items than what was offered for pledging to SpaceVenture. We plan to offer a different SpaceVenture T-shirt than the backer one, official Cluck Y’egger pins, possibly a new SpaceVenture coin(this will not be a Buckazoid, it will simply be a really awesome collectible coin).

Something we also will have available in the store will be a series of collectible cards. Here is a preview: The cards are standard baseball card size. 2 1/2 by 3 1/2 inches. In creating these cards, we have teamed up with web comic/artist Len Paralta(geek of the week fame). This card was created with direction of Mark Crowe, Scott Murphy and Chris Pope. Scott Murphy did the writing. We plan to release a card for each character in SpaceVenture. 🙂

All items sold in the store will be shipped out shortly after purchase.

As you may have heard, Titanbase Productions created a nifty little action arcade type game for iOS devices(android being discussed). They have a $.99 promotion going on right now, so check it out if you have an iOS device!

We’re also pleased to announce that Jim Walls(creator of Police Quest) will be talking with Chris Pope soon on the Guys From Andromeda Podcast! Stay tuned for that, and be sure to check out previous episodes!

We hope everyone is as excited as we are about all that is going on. Please continue to help support the SpaceVenture efforts by spreading the work!