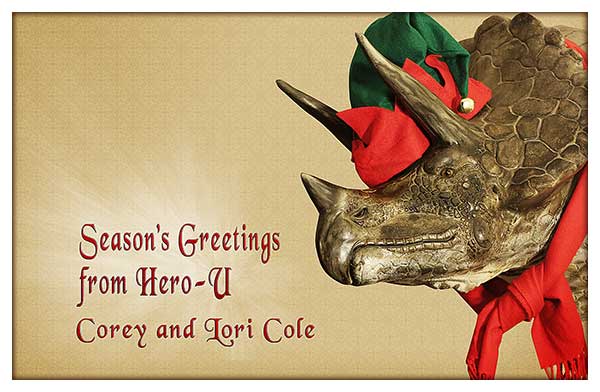 Well, it appears that most of us have survived the Apocalypse supposedly predicted by the Mayans.  It’s a funny thing – When one of my calendars runs out of months, I usually get a new one.  For some reason, when the Mayan calendar ran out of years, a lot of people panicked.

Like some of our friends, Lori and I both wore red shirts on Friday.  After all, on Star Trek, crew members wearing red shirts usually died.  So it was only fitting that we should all wear red shirts on the day of the Apocalypse.  That day was also the Winter Solstice, shortest day of the year.  Now that we’ve survived, the days will keep getting longer, and Hero-U: Rogue to Redemption will keep getting closer to completion.

In response to my previous Update, so far I have received responses from about one-third of the backers entitled to a previous game key.  We need more, so I have now sent surveys to all of the $50 and $65 tier backers.  Please answer your survey as soon as possible.  It’s ok to answer the survey if you already told me what key you want.  I’ll see from the database whether I’ve already sent you a key.

Incidentally, I’ve fulfilled all the previous game key requests that I received on Dec. 20 or earlier.  I also sent all three keys to backers at the $175 level and $500 and higher levels.  If you pledged at a level other than $50 or $65, and you added money to your pledge to get a previous game key, please send email to support (at) hero-u (dot) com.  Specify your Kickstarter user name and the add-ons you want.  If you pledged at the $50 or $65 tier, please answer the survey.

Although we have not yet started full production on the game, we’ve added a programmer to help build the game “rooms” and an animator.  Todd Hendrix has programming credits all the way back to Might & Magic and Heroes of Might and Magic.  We worked together on an online poker site, and I’m excited to have the chance to work with Todd again.  Bryan Ellis is a talented local artist who worked at Sierra and several other local game companies.

Andrew has prototyped the isometric-view modifications to his game engine, and we’ll start developing art and animation for it in January.  In the meantime, Lori and I have been working on the game design, converting FAR Studio to an LLC, and fulfilling previous game key requests.  The latter has been time-consuming, but I’ve worked out some ways to speed up the process.

Why an LLC?  That will help us to raise additional funding that we can use to create a better-looking and more impressive game than we think we can manage on the Kickstarter budget alone.  Our goal is to give our backers much more than you paid for.  Adding content will also mean more work for the team, so they won’t starve quite as much.

While I’ve been working the spreadsheets, Lori has added quite a bit of content to the game design.  After Shawn has had some time to explore the University and storage cellar, he’ll find some exciting opportunities in the Sea Caves.  Meanwhile, Lori has added an entirely new plot line based on the story of one of our “Wing” backers.  We’ll send out a Survey to the other Wing and Monster Lair backers next month to see how your stories can be incorporated into the game.

We’ve also done some work on the stats and skills systems, with much more yet to come.  There will be some seriously challenging game play with a bit of whimsy and humor.  Shawn doesn’t take much seriously, and that includes his hard-won Rogue education.

There is a lot more going on, but we wouldn’t want to spoil it for you.  And of course every design decision is in flux until we test it.  An important part of good game design is being willing to throw away our most cherished ideas when they turn out un-fun.

We hope you are all having a good holiday season, and we wish you a happy and prosperous 2013.